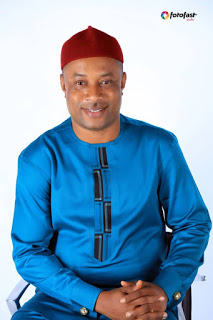 Hon Amb. Uche Ogbuagu is the Honourable Member representing the good people of Ikeduru at Imo State House of Assembly.

Hon Amb. Uche Ogbuagu has  changed the lot of Ikeduru people by bringing lots of development to the people. He established his business right in his village,   provision of potable water,  youth employment opportunities and women empowerment to mention but a few.

He has demonstrated through his numerous community development projects that he cares for the people even before his foray into politics.

He has demonstrated through various selfless services to his town, that he knows what it takes to bring development to the grassroots. He has continued to do same for the Ikeduru State Constituency by speaking out recently on the deplorable conditions of Ekemele Road which is making the people to pass through untold hardship.

For far too long Imolites has been denied effective representation we deserve. This sad situation changed when  Hon Amb. Uche Ogbuagu stepped forward to speak up and fight for the progress of his people.

Here is the profile of Member Representing Ikeduru State Constituency:

Hon Amb. Uche Ogbuagu was born to the family of late Pa Alexandra and Madam Lovendar Ogbuagu in August 1972 at Amii Village, in Akabo-Ikeduru Local Government of Imo State, Nigeria.

On leaving the Secondary School, Hon Amb. Uche Ogbuagu started his discipleship training working for his mentor, Late Mazi Chike Gbujie in his Company,         Astral Circle Enterprise, Aba, where he gained vast experience as a             Video Cameraman, a Script writer, and comedy actor.

Hon Amb. Uche Ogbuagu became the most sought for and expensive master of ceremony in Abia State and beyond.

Today, Hon Amb. Uche Ogbuagu did not drop his quest for education in preference to money. He moved on to Abia State University, Uturu, where he obtained a Bachelor of Arts degree in Mass Communication.

Hon Amb. Uche Ogbuagu, was given a Political Appointment in 2011 as Special Assistant to the Governor of Imo State on Entertainment and Chief Comedian of Imo State by His Excellency, Owelle Rochas Okorocha. He was promoted to Senior Special Assistant in 2013 in which capacity he served Imo State until he voluntarily withdrew his services on December 15, 2013.

Although, Hon Amb. Uche Ogbuabu, has been weathering through the rough life by self help supported by the special grace of God, he has been a great achiever, within the short period of his exposure. He has the following records of achievement to his credit:

Hon Amb. Uche Ogbuagu was conferred with a meritorious award of United Nations Peace Ambassador in 2014 in recognition of his outstanding contributions in propagating world unity through arts and comedy as he traversed the various continents with his performing troupes over the years.

Hon Amb. Uche Ogbuagu was the Head of Creative Media Department of the famous Transformation Ambassadors of Nigeria, TAN, the most intimidating political campaign war-horse ever created on the Nigerian political arena since independence.

Hon Amb. Uche Ogbuagu, has being helping the widows, the needy, the less privileged and the disable through his charitable organization Uche Ogbuagu Lovendar Foundation.

So, let all thumbs be up for a Hero of Entertainment and Creative Media who is spreading the Gospel of Peace, Happiness and Healthy Living to all Humanity with his God given talents.
POLITICS