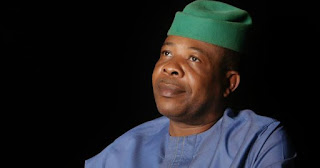 The rumour,  making rounds that His Excellency, Rt Hon Emeka Ihedioha, was implicated in the money laundering saga involving the Chairman/CEO of Peace Airlines, Sir Allen Onyema, is not only laughable,  but an expensive and dry joke.

The story, which was obviously cooked up and garnished in the infamous kitchen of the harum-scarum opposition, is apparently a backlash against the recent tripple victory of the Governor at the Court of Appeal, where his election was duly upheld. Having been roundedly trounced by the Chief Rebuilder of the Rebuild Imo Agenda, Rt Hon. Emeka Nkem Ihedioha,  the hopelessly depressed opposition, have resorted to propaganda and other means of self-help to vent their frustrations.

There is no law that says that Gov Ihedioha is not entitled to associate with people of means. The mere fact that Allen Onyema is an associate of the Governor, is not an automatic proof that they are business partners or that His Excellency is involved, or even aware of the alleged $20m money laundering transactions in question. If people are to be indicted by their close association with others, then men like Sam Onwuemedo, Onwuasoanya FCC Jones, Uche Nwosu et all, may also be accused of homosexuality, since they worked for a Government that was labelled by Imolites as a cesspool of  homosexuals and lesbians.

Again, it is purile for any responsible individual to refer to Gov Ihedioha's foreign trips as "secret" and not result oriented. If his trips were secret, then how did the rumour mongers get wind of it? Come to think of it, some of those trips may not have been necessary had the immediate past administration of Rochas Okorocha not ruined the economy of the State. When former President Olusegun Obasanjo took over the ravaged economy of the country, badly battered by decades of military misrule, he realised that the nation needed urged foreign aid to survive.

In order to do so, he embarked on several diplomatic trips abroad to seek for aid, which many myopic persons politicized and  criticized. However, he ignored such destructive criticisms and persisted. Today we are enjoying the benefits of those trips which include,  massive foreign investments like the GSM phone business, internet, debt forgiveness, to mention but a few. So Gov Ihedioha's trip overseas is very similar to what OBJ did in 1999.

However, it is most uncharitable and unreasonable for one to expect such trips to start yielding immediate dividends. Obasanjo's foreign trips didn't yield immediate results. It took several months and even a couple of years before some of them materialized. No one plants a seed and it germinates and grows the same day. Therefore, those suggesting that in less than 7 months of being in power,  the foreign trips embarked upon by Gov Ihedioha should've started producing results, are either ignorant of the kinetics of diplomatic relations or simply mischievous.

To cap up his imbecilic disposition, the author of the propaganda also hinted that the Governor inherited a fabled N48bn from the immediate past administration, an insinuation which is neither here nor there. The information is already in public domain, that whereas Okorocha inherited over N26bn from the Government of Chief Ikedi Ohakim which he squandered, he didn't leave a dime for the present administration. Instead he bequeathed on the State a debt burden of over N200bn, with nothing on ground to show for it.

However,  the people are aware that part of that N200bn may have been spent on vote buying in the failed attempt by Okorocha to obtain a third term through his son-in-law, Uche Nwosu. Also, some part may also have been invested in the multi-billion Naira worth of properties belonging to the Okorocha's which the Economic and Financial Crimes Commission (EFCC) sealed some months ago.

Some part of that money may also have been used to purchase judicial reprieve for Okorocha's senatorial victory, which the Independence National Electoral Commission (INEC) still insist he captured through the "barrel of a gun". Imolites, and indeed Nigerians, are also aware that a larger chunk of that largesse may have been reserved for Okorocha's inept 2023 presidential ambition. However in all these, Imolites remain the victims of a Government which was rightly rated as the worst in the entire country, between 2011 and 2019.

It is  also outlandish to imply that Allen Onyema may have been a courier for Gov Ihedioha. What is the meaning of that? In the entire political history of Imo State, and even Nigeria, I doubt if their is any politician that has ocuppied very high positions of authority like Rt. Hon Ihedioha, and came out unscathed. Ihedioha has been a 3 time member of the House of Representatives, where he served as Chief Whip, Deputy Speaker and Speaker, yet it has never been heard of that he was invited by any anti-graft agency to answer to any case of graft.

But you can't say the same about Okorocha or even Sen. Hope Uzodinma. They two men at best, may be referred to as "customers" and even "shareholders" of anti-graft agencies, going by how frequently they have been invited by these agencies, to answer to one allegation of fraud or the other. Infact at a time, it was reported that  Sen Uzodinma had to jump bail and evade arrest while running away from anti-graft agencies.

At the twilight of his tenure and a few days before shedding his immunity,  Okorocha had to obtain a frivolous court order restraining the EFCC from arresting him or any member of his family. And I ask, what is the essence of obtaining such orders if he is innocent? It is said, a clear conscience fears no accusation. Okorocha should have gone to the EFCC to clear his name, instead of going for a court order, which by implication confirms his culpability.

However, it is noteworthy and yet commendable, that after serving in several high positions Gov Ihedioha doesn't have a single case of graft. An Igbo adage says, "anaghi amu aka ekpe na nka" (character is not formed at old age). Constitutionally, the offices of Deputy Speaker and Speaker of the House of Representatives are higher than that of Governor. And I ask again, if Ihedioha didn't launder money while occupying those higher  offices, is it now that he will do that?

It must be reiterated here, that the opposition by virtue of there self-centered and "Janjaweed" style of politics, are trying to further compound the already complicated condition of the State which they created during the misgovernance of the last 8 years. Immediately after, they lost at the Governorship Election Petitions Tribunal, they formed an amorphous and criminal "Shadow Government", with a clandestine objective of destabilizing the State. That one was dead on arrival.

As unpatriotic and unlawful as this action is, Gov Ihedioha still extended an Olive branch to the key actors to join him in rebuilding the State. An offer he also repeated after the judgment of the Court of Appeal, yet they wouldn't bulge. Now we are hearing rumours that some or all of them are heading to the Supreme Court. Well,  that also will be a fait accompli.

Now they have resorted to cooking up incredible propaganda all in a futile bid to overawe the People's  Government. Unfortunately for them, Imolites have been weaned of their shenanigans and are fully behind the quest to rebuild the State.

I won't fail to conclude this treatise with the words of Prophet Isaiah in chapter 50 verse 7 of his book in the Bible, "For the Lord GOD will help me; therefore shall I not be confounded: therefore have I set my face like a flint, and I know that I shall not be ashamed". Gov Ihedioha has set his face like a flint, in his bid to rebuild Imo, GOD will help him, he won't be confounded or put to shame by the propaganda and irresponsible conduct of the
cantankerous opposition.
POLITICS