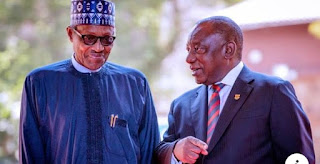 President Muhammadu Buhari and his South African counterpart, Cyril Ramaphosa, have vowed to put in place all measures needed to prevent a reoccurrence of xenophobic attacks on Nigerians and other foreigners in that country. 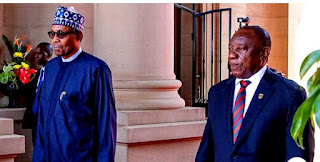 This was contained in a joint communique issued by both leaders at the end of their meeting on Thursday in Pretoria, South Africa.

At the meeting, President Ramaphosa briefed President Buhari on the recent incidents of violence affecting foreign nationals living in his country.

He also acknowledged that the attacks on foreigners were not consistent with the values and principles underpinning the country’s constitutional democracy.

He assured President Buhari that the South African government was fully in control of the situation and several interventions, including engagements with the diplomatic community and others, were underway.

On his part, President Buhari who condemned the attacks on Nigerians expressed profound gratitude for the warm reception and hospitality accorded to him and his delegation.

He also invited his South African counterpart to pay a reciprocal visit to Nigeria on a date to be jointly agreed and communicated through diplomatic channels.

Read the full text of the joint communique issued by both Presidents below:

JOINT COMMUNIQUE ON THE OCCASION OF THE STATE VISIT TO THE REPUBLIC OF SOUTH AFRICA BY HIS EXCELLENCY, MUHAMMADU BUHARI, PRESIDENT OF THE FEDERAL REPUBLIC OF NIGERIA AND THE INAUGURAL SESSION OF THE ELEVATED BI-NATIONAL COMMISSION BETWEEN SOUTH AFRICA AND NIGERIA, PRETORIA