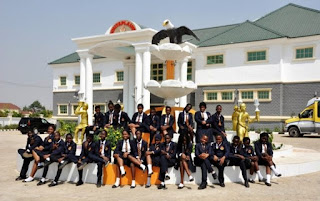 The management of Whiteplain British School has called out First Bank Nigeria Limited over loan scam that would have seen the bank taken over their school if not for the intervention of the National Assembly.

Dr. Nwafor through a press statement revealed that Whiteplain British School had taken a loan of 690 million Naira from First Bank, which includes 200 Million Naira running cost and without the knowledge of the school, First Bank withdrew 188. 6 Million as Perfection charges.

The release by the school also has it that First Bank has through their lawyer, accepted to have forged land documents issued to the school in a panel headed by Hon. Uzoma Nkem Obonta of the Federal House of Representatives and the resultant effect of the matter which almost cost them their school is that they have lost tons of students because of the fear that their school will be taken over by First Bank.

Dr. Nwafor went further to assure the general public that there is no such thing as takeover by First Bank and they are still a very strong academic institution, ready and admitting for the new academic session.

See video below for statements by former owner of the land

It started with a loan taken by Whiteplain British School from First Bank in 2013 in the sum of 690 million Naira, as shown in the video. Out of the 200 Million Naira running cost, First bank withdrew 188. 6 Million as Perfection charges leaving only 11. 4 Million Naira for the school as running cost without the knowledge of the school.

While the school was still servicing the loan and has paid up to 380 million Naira, the bank threatened to take over the school in 2018 on the grounds that the school is unable to pay when it has a six years agreement to pay the loan elapsing at the end of 2019.

First bank also rushed to the school's premises and sealed it off without a court order, claiming that the school entered into a tripartite agreement with the former owner of the land on which the school is built, that the bank can take over the land.

The former owner of the land in the video clearly said she knows nothing about the agreement and has never entered into any agreement of such.

In a bid to get justice the Whiteplain British School petitioned the First Bank before Hon Obonta public hearing committee in April 2019.

During the hearing the First Bank's lawyer affirmed that the purported triapatite agreement was forged by First Bank. In the final analysis of the matter, Hon Obonta's panel found First Bank guilty of forgery and ordered that the central bank of Nigeria CBN, the DSS and Police investigate the activities of First Bank.

If not for the intervention of the national assembly, First Bank would taken over the school.  It is on this basis that the police is expected to investigate first bank as many entrepreneurs have lost their investments to many banks such as First Bank. 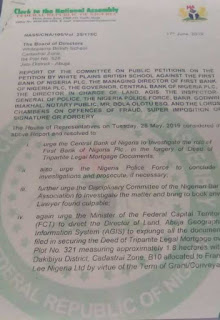 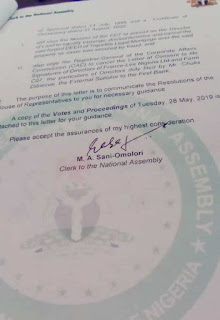