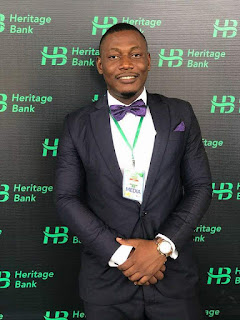 Ibe Onyebuchi David makes FAA2019 nomination List. By this he has entered Africa's Hall of Fame as Young Creative Director and among those shortlisted for Arise Afrika Magazine Award which is scheduled to hold on July 27 at Prestigious Full Moon Hotels Owerri.

Let's meet the man rocking it big in the media industry. He is passionate.

Onyebuchi David Ibe is a Knowledge Management and Communications Specialist based in Abuja, Nigeria. He was born on the 5th of February 1990.
He is a graduate of Theatre Arts from Imo State University where he studied from 2006 to 2011.
He began his media career as an Actor, Cinematographer, Director and Editor featuring in movies such as Deadly Compromise, The Father’s Bill, My Friend and I, produced by Festus Iduh. He also did the movies “Restitution” produced and Directed by Kenneth Nnebue, and “Lizzy’s Memorial” produced by Chima Igbokwe.
He directed and edited pre-election sensitization short films for Peace Ambassadors of Nigeria titled Peace Now.
Over the years, Onyebuchi has worked and volunteered for organizations such as Dignity Global Communications, Health and Governance Project for USAID, and Guardians of the Nation International (GOTNI)
In the 2019 general elections, he worked with the YPP gubernatorial candidate, Linus Okorie as a cinematographer and creative director in charge of all video and audio contents such as radio jingles, documentary videos, photography, etc.
He is currently the Director of Onyexmedia Production LTD and have produced numerous media contents which cuts across Social media, Radio, Television, Photography and Film.
He is also a comedian known for his online popular alter ago, Okotoribo Obukomenoh which he uses for comedy skits.
Onyebuchi has certifications from Frontline Media Academy, Actors Guild of Nigeria FCT chapter, New Vision Capital Development program, Niger Delta Youth Empowerment program in Entertainment, St. Paul’s Anglican Church Talent Hunt Show and Special Youth Ambassador Award.
Profile