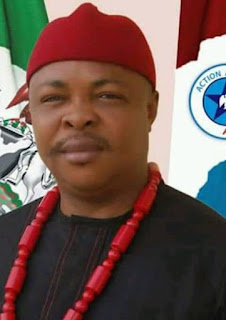 National Chairman of the Action Alliance, AA, Kenneth Udeze has harped on the need for stronger institutions that stronger men in Nigeria.

In his lecture with the topic “ Effects of Building Stronger Institutions Than Stronger Men” organized by IMSU Alumni,  Udeze, said for a nation like Nigeria to be strong enough where rule of law is the order, the institutions of government must be positioned and empowered with both legislative and judicial capacity.

“For a nation like Nigeria, and other nations in the world (for that matter) to be strong enough where rule of law is the order, the institutions of government must be positioned and empowered with both legislative and judicial capacity, to the extent that no individual in the nation should be accorded higher consideration than the law that established those institutions or organizations. The flaws found in any failing or failed state or nations in the world, is as a result of obvious misplacement of priorities and deliberate abuse of the rule of law, to please an individual or a people

He listed some factors that militate against strong institutions which according to him include “compromised Central government system, poor funding , lack of definiteness of purpose and all forms of misappropriations, Impunity and ineptitude in government, selective justice and delay in the judicial process and subtle Ethnic cleansing activities

He also enumerated the gains of building stronger institutions to include “functional public utilities for the poor and the rich, orderliness and promotion of entrepreneurial spirit among the populaces, Limitation of senseless and avoidable killings, Elimination of mediocrity in the system, Elevation of rule of law, justice and fair play,  Foreign Direct Investment, Non tribalistic and religious considerations, Well regulated and properly organized electoral process and  Quality Control and promotion Consumer rights

The Action Alliance National Chairman also gave an x ray on the mess strong individual create in the nation.

“When you have a weak constitution, you will definitely have a flawed government and a dysfunctional society, and where the foregoing exists, individuals with deep pocket and political structures will manipulate the system towards their own pecuniary interest, thereby creating a systemless-system in all activities of the nation. This is the pathetic picture of the Nigerian nation, and that’s the reason for non adoption of the positions adduced by the members of the last constituent Assembly, which if implemented, would have given rise to an improved and a functional government.

“He continued “When you appraise the performance of developed nations, and their exercise of their fundamental human right and their GDP, you will easily notice that they owe their success to the nature and structure of the Institutions of their government.

“Let us look at the so called stronger nations. China, United States of America, Germany, United Kingdom, Canada, Saudi Arabia (for the purpose of this presentation), France, Japan etc, are strong Nations because they have very strong and responsible Institutions. Let me point out here, that it is always better to have stronger nations, than stronger individuals
NEWS