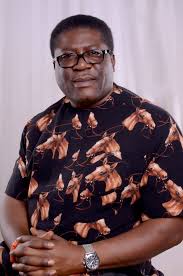 Mbieri people under the aegis of Mbieri Nation's Political Forum (MNPF) has raised concern over the perceived  anti-Mbieri political stance of their son  the Deputy Governor of Imo State His Excellency Eze Madumere which is a major disappointment to most of them who now  perceive him as one playing  politics without conscience .

The murmurings over the Deputy Governors choice of candidacy for the February23rd House of Rep and 9th of March  House of Assembly elections in which he has sidelined the political ambition of his kinsmen over that of his personal acquaintance from other communities in the LGA has attracted an upsurge of criticism to his person.

The Youths are fiery over what they perceive as a deliberate move from the Deputy Governor to shortchange his Kinsmen  in the 2019 elections via supporting his political acquaintances in politics over his kinsmen who rightfully deserve the same position , thereby leaving  Mbieri people at a disadvantage in the  permutations of  Mbaitolu Ikeduru Polity.

The Deputy Governor's preference of supporting  Hon. Chibuzor Iwuore for Mbaitoli and Ikeduru (MBAIKE) Federal House of Rep  and Ifeanyi Nnataraonye who is vying for Mbaitoli State House both under APC  is not going well with his people as both  candidates hails from Mbaitoli North, thereby  sidelining  three Mbieri sons in persons of  Hon. Okey Onyekanma(Esq), Hon. Collins Ugorji and Emeka Ahaneku ,who are all contesting for the State House of Assembly.

'' The  political  interest of our illustrious son the Deputy Governor of Imo State should not surpass the political development and goals  of the entire Mbieri nation, so we urge him to rethink and retrace his steps. Prince Eze Madumere should not forget the unalloyed support he got from  Mbieri people during his altercation with his principal  Owelle Anayo Rochas Okorocha, that incidence should be a premium indicator to him on the need to ensure the growth of Mbieri youths in Imo Polity , Mbaitoli North are today  holding both the Federal house of rep seat and local government TC position yet the Deputy Governor is going ahead with his political sacrilege by supporting the Mbaitoli North for house of assembly '' Nze Onyeka Okoro berated Prince Eze Madumere.

" He should not take for granted our love for him as our son and brother and should  know that there is palpable anger among the Mbieri youths over his political stance , we can't count of any benefit of his office to Mbieri nation at large in all his political escapade so far ,now he is adding insult  to injury by denying us the little political  loyalty that he owe his kinsmen, if not for any reason but atleast as a show of gratitude of our support for him all these years.'' Nze Onyeka Okoro reiterated.

"We have come to the conclusion that all Mbieri people  should   go to any length within the law  to ensure victory for its sons and daughters  vying  for political offices in the forth coming election ,because if we don't support our own first how can we get others to do same , unifying our voice and vote  is a harbinger for progress and development in our community, so we urge the Deputy Governor  to wake up to the reality on ground which is  the fact that he is bound to lose the entire support of Mbieri youths if he doesn't retrace his footsteps as this will lead to his political ostracization in his own community " Nze Onyeka Okoro concluded.

Mbieri people dread the certainty that Eze Madumere's  political posture is truncating the emergence of an Mbieri son at the Imo hallowed chambers come may 2019 as this will further endanger the political development efforts of Mbieri community in the coming democratic dispensation. This emerging reality is a  negative pointer that the Deputy Governor is not interested in the political development of Mbieri nation and its people.