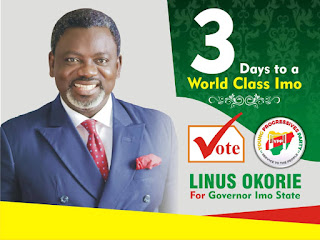 Urges the people to give him Douglas House so as to transform Imo by voting for him and preventing "vote devourers" from stealing our votes. 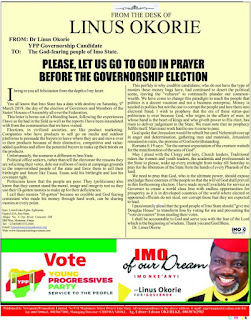 Here is the words of the letter in full:

Please, Let us Go To God In Prayer Before The Governorship Election

I bring you all facilitation from the depth of my heart.

You all know that Imo State has a date with destiny on Saturday 9th March 2019, the day of the election of Governors and members if State's House of Assembly all over the Federation.

This letter is borne out of a bleeding heart, following the experiences I have so far had in the field as well as the reports I have been inundated with from the communities that we we have visited.

Elections, in civilized societies, are like product marketing, companies who have products to sell go to media and outdoor platforms to persuade the buyers to leave where they are and move over to their products because of their distinctive, competitive and value added qualities and allow the potential buyers to make up their minds on the products.

Intimately, the scenario is different in IMO state.
Political office seekers rather than tell the electorate the reasons they are soliciting their votes, dole out millions of naira at campaign grounds to the impoverished people of the state and force them to sell their birthright and  lost his covenants right.
Politicians know that the people are poor. They (Politicians )also know that they cannot stand the moral, image and integrity test so that they use their ill gotten monies to make up for their deficiencies.
I call their monies "ill-gotten" because no credible and God fearing contestant who made his money through hard work, can be sharing monies at every point.

This perfidy is why credible candidates, who do not have the type of monies these money bags have, had continued to desert the political scene, leaving the "vultures" to continually plunder our common wealth. We have come to change this paradigm to teach the people that politics is a decent vocation and not a business enterprise. Money is needed in politics but the one to corrupt the people and lure them into electoral fraud. I wish to prophesy that the era of these status-quo politicians in over because God, who reigns in the affairs if men, in whose hand the heart of kings and who guveth power to His elect, has risen to deliver judgement in the State. We must note that no prophecy fulfils itself. Men must work hard to see it come to pass.

God spoke that Jerusalem would be rebuilt but until Nehemiah rose up in anger and determination, gathering men and materials, Jerusalem remained in ruins, the promise of God notwithstanding

Romans 8:19 says: "for the Ernest expectation of the creature waiteth for the manifestation of the sons of God"

May I plead with the Clergy and laity, Church leaders, Traditional rulers the women and youth leaders, the academia and professionals in the State to please, wake up every midnight from today till Saturday to pray for the liberation of the State from the hands if every Pharaoh of the land .
We need to pray that God, who is the ultimate power should expose and judge these enemies of the people so that the will of God shall prevail in this forthcoming election. I have made myslef available for service as Governor to create a world class Imo with endless opportunities for prosperity as it is in developed countries of the world where elected or appointed officials do not steal, not corrupt those that they are expected to lead.

I passionately plead that the good people of Imo State should "give me Douglas House" to transform Imo by voting for me and preventing the "vote devourers" from stealing their votes.

I shall be accountable to God and serve you with the fear of the Lord which is the beginning of wisdom.

Thank you and God Bless