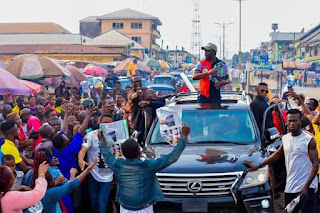 Like a hurricane, the governorship candidate of the United Progressive Party, UPP, Hon Tony Nwulu has rounded up his 2019 Imo Gubernatorial electioneering campaign after a successful touring of 27 local government Areas of Imo State. 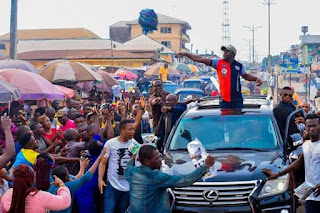 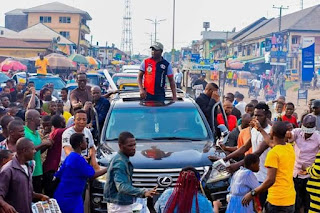 The member of the House of Representatives representing Oshodi/Isolo 11 federal Constituency of lagos state equally visited all community markets and Owerri City Markets were he dolled out millions of naira as grants to market men and women.

The Eziudo Ezinihitte Mbaise born federal legislator and entrepreneur while touring the Imo Communities during his electioneering sensitisation sprays millions of naira and other gift items like wrapper, Tea, rice, etc.

The UPP Guber, Nwulu who had out spent his contemporaries in the gubernatorial projects has continued to raise issues where did he gets his money from, political observers ask.

Many had alleged that Nwulu had the strong support and financial backing of the Presidency, National Leader of APC and the International community.

Hon Tony Nwulu of UPP has received a boost to his chances of making it to Douglas House with a visit of the famous group, Wealthy Brothers Association of Nigeria led by Comrade Anthony Uzoma Ihedioha.

Speaking to newsmen during the courtesy visit to his Owerri residence on Tuesday, Ihedioha disclosed that it was to officially pledge to support Nwulu who they said is the most credible candidate for Imo Governorship position.

He expressed optimism that with their total support, Nwulu will emerge the next governor of the state come March 9.
"We are standing behind any youth that is ready and has shown capacity to win and govern the state effectively.

" So our support and endorsement for Hon. Tony Nwulu is basically because he is a youth , and because of his credibility and antecedents.
"By the grace of God, with our total support we know that he will win. Also considering what we have heard about him, we have absolute confidence that he can deliver. Ihedioha said.

Responding, Nwulu expressed immense gratitude to the group for finding him worthy for their support and promised to remain resolute in his resolve to offer the most effective, democratic and all inclusive governance and leadership to Imo people if elected.
He also reiterated that the development and empowerment of youths remains pivotal to his agenda for the state while reassuring that Imolites will experience all round development and dividends of democracy in his administration.

Nwulu also used the opportunity to charge the youths to engage more actively in political activities; stressing that in no distant time, the youths will occupy major political positions in the the state and Nigeria in general.
" The youth is my primary constituency and I can boldly tell you that by 2023, youth will have major stakes in the Nigerian polity and will occupy higher number in the state and National Assemblies.

"So I implore you to join hands with me. Don't relent in your support for me. Do all you can to elect me your next Governor and I can assure you that Imo will be better again for our general good" Nwulu said