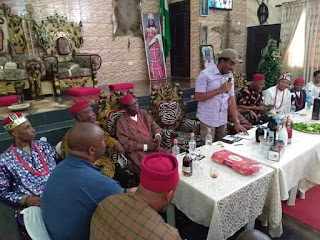 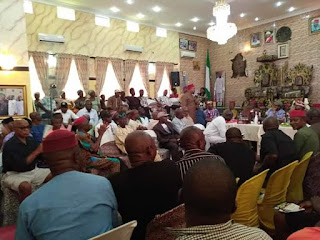 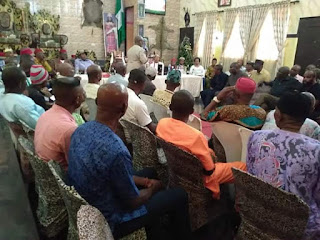 During the meeting, the APC candidate for the Federal House of Representatives, Deacon Chike Okafor seized the opportunity to express his heartfelt gratitude towards the good people of Ehime Mbano for showing him unrestrained love with their votes without minding the distraction of having their three (3) illustrious sons on the ballot who were vying for the same position and other distractions including the false disqualification propaganda, delay in voting, snatching of sensitive electoral materials, distribution of malfunctioning card readers, incitement of violence, high level of intimidation melted on many of his voters by thugs hired by the opposition camp just to distablize his major strong holds.

With records gathered, it revealed that the APC Candidate, Deacon Chike Okafor was leading in Ehime Mbano LGA before the cancellation was announced by INEC.

Deacon Chike Okafor further appealed to them to once again, troop out en mass with one mind to vote for him and protect their votes, promising that the issues which disrupted His February 23rd election victory while leading to its outright cancellation and inconclusive nature was being attended to, meticulously.

During their speech at the event, The various  speakers who represented their various wards, communites, political parties, religious and political groups threw in their total support for the re-election of Deacon Chike Okafor while promising to deliver more votes in the forthcoming supplementary election. They applauded the revered honorable member for showing commitment and strength in his passion to develop Okigwe South rapidly and prayed for his Success at the poll. They also noted that although the election was inconclusive, it has seperated the contenders from the pretenders and has helped them to seive the chaffs out from ballot.

The high point of the event was the timely collapsing of political structures from major oppostion leaders in various political parties including the coalition supporters and majorly, the supporters of Barrister Chukwuemeka Nwajiuba of the Accord Party in Ehime Mbano who were present at the meeting to register their support for Deacon Chike Okafor noting that there was no need for them to throw away and waste their votes on their principal, Hon Nwajiuba who to them, was already coming a distant third on the ballot with a very wide margin.