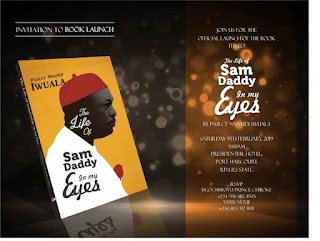 Owerri based humanitarian, writer and activist, Mr. Paulcy Iwuala, will on Saturday, February 9, 2019, launch his literary work entitled, “The Life of Samdaddy in My Eyes”.

A release by Iwuala, who is the founder and Chief Executive Officer of Genius Eyes International Foundation and Living Tribute Ltd, puts the venue at Presidential Hotel, Port Harcourt, Rivers State.


Iwuala had last week made public the book which talks about the life of a serving Senator of the Federal Republic of Nigeria, Sen. Samuel Anyanwu (Samdaddy), who represents Imo East Senatorial District at the red chamber.

Announcing the literary output, the author said the book was in line with his Living Tribute project.


“In line with The Living Tribute Project which I initiated about two years ago to continually appraise and celebrate individuals, experts in various fields of human endeavour and leaders who are deserving of recognition, I had written about many people and celebrated them while they are still alive”, he announced.


The statement partly reads: “However, I felt that there was more to Sen. Samuel Anyanwu (Samdaddy), a charismatic and enchanting politician who is so loved and admired by many. Hence, I wrote and published this work. No one is perfect, not me , not you , not Sam Daddy. But I have chosen to write a few among the beautiful things I have seen in a man whom when you go close to, his love for humanity in just a short time can make you stand by him forever.


“Countless times he has been of help to the helpless. I wouldn’t begin to say how immensely he supported and helped my NGO, even Internationally, how he built a house for a homeless family. Yet, he asked not to be mentioned on the project as he does not want his life of charity to be affiliated with his political life”.

Mr Iwuala said his book criticised no one but expressed what love should be.

‘The Life of Samdaddy in my Eyes is a book that criticised no one but taught me what love is and how he (SamDaddy) even in his world of mistakes is a man with a large heart, and immense deposit of love tucked in somewhere waiting always to be explored.


“The book does not project Samdaddy as perfect, actually no man is, but it looks into the many good things about one of Nigeria’s finest lawmakers ever. Through this book, I gave honour to whom it is due”, he noted.