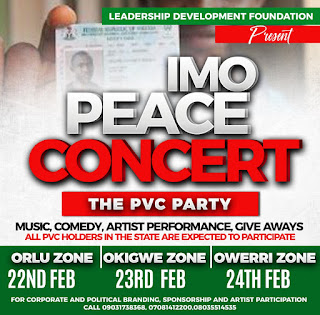 Imo Peace Concert  : THE PVC PARTY to HIT IMO STATE  this February.
Preparations are being finalized for the Imo Peace Concert (The  PVC Party)Which is being put together by Leadership Development Foundation   to spread the message of peace and tolerance during the coming polls in the state and Nation at large.
The PVC Party   is aimed at gathering Ndi  Imo that has obtained their PVC  at one place using music, comedy and other forms of  entertainment  to convey the message of No Violence in the February 16th and March 2nd Election to them  and also to particularly make them understand the power they carry within their Permanent Voters Card (PVC ), so as to appreciate how very important they truly are; thereby encouraging them to exercise their right to vote in the election .
The event will feature musical performances from A list Artistes in the nation, comedy, give-aways, short motivational speeches from traditional, political and religious leaders and the doors to the concert will be free and  will open for only those who have their PVC .
The organisers feel that music, humour and indeed entertainment is a universal language making it an acceptable way to communicate to Ndi Imo and get them to see the need to participate in the coming election and the target is to reach over 100,000 people  across the state of Imo in their respective political zones of Okigwe, Orlu and Owerri within this period and inspire them to participate in the polls, the organisers intend using the power of  social and mainstream media platforms for the  PVC Party.
Leadership Development Foundation ,Nigerian Eye newspaper and Arise Africa   are open to collaboration with corporate institutions and media entities, traditional rulers,religious and youth leaders in the state  to ensure a memorable concert in Imo State this political season.
Events NEWS POLITICS