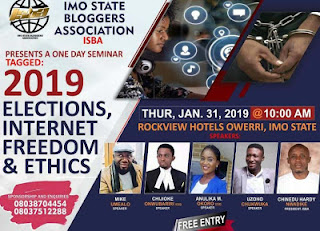 Imo State Bloggers Association (ISBA) is to hold a seminar at the Rockview hotels in Owerri on Thursday 31st January 2018.
According to the  President of ISBA, Comrade Hardy Chinedu Nwadike  the seminar which is tagged ‘2019 Elections, Internet Freedom and Ethics’, is aimed at sensitizing the general public, especially users of the internet, on the right ways use social media platforms ahead of the elections and beyond it.

He said ISBA was formed about 6 years ago with the aim of uniting bloggers and ensuring that members operate with good standards.
According to him, the internet has been continuously flooded with fake news and hate speech and if the trend is not checked on time, could lead to disastrous results.
Said he; “one of the ways through which ISBA can assist the State and Federal government in the fight against fake news and internet fraud is to hold a seminar whereby the bloggers in Imo state will unveil their identities and showcase their individual contributions towards guiding the internet users on the globally accepted best practices. This will check the proliferation of rumors and hate speeches often witnessed in various social media platforms thereby reducing cases of unnecessary tension and overheating of the polity especially now that the elections are around the corner.

Some distinguished persons and government agencies, including the representatives of the Nigerian Police and the Independent National Electoral Commission (INEC) are expected to grace the occasion.
Events