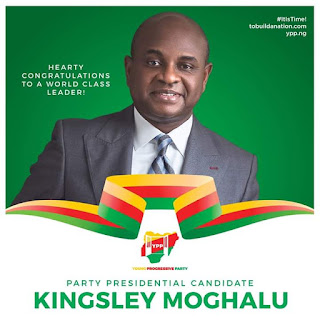 Vice-President Yemi Osinbajo’s reported recent statement at the palace of the Alafin of Oyo that ethnic Yoruba should vote for President Buhari in 2019 so that the Yoruba will produce the President of Nigeria in 2023 is a sad and disappointing appeal to tribalism in leadership selection in the 21st century. That this statement comes from an educated personage as Prof. Osinbajo shows us why we must turn our backs collectively on the recycled old politicians as represented by the APC and PDP.

We must say NO to tribalism and ethnic irredentism. The twin evils have caused much damage to our national unity, leaving us a broken country when we should by now have become a real nation.  If elected President of Nigeria in 2019, my government will unify and heal Nigeria of extreme tribalism by establishing a philosophical foundation of the Nigerian state that will unite us around a common national ambition and a national identity instead of tribal ones.

Senior officials of the APC-led federal government have been peddling ethnic identity politics in order to win bloc votes in the 2019 elections. Boss Mustapha, the Secretary to the Government of the Federation, has reportedly assured the Igbo of the Southeast geo-political zone that they essentially will be “granted” the presidency of Nigeria in 2023 if they vote to re-elect President Buhari in 2019. And Raji Fashola, the Minister of Power, Works and Housing,  has argued that the presidency should return to the Southwest in 2023.

This duplicitous and primordial politics of the APC-led federal government, alongside vague promises peddled by the PDP of an “Igbo presidency” in 2023 is proof, assuming any was needed, that politicians from any part of our country who believe that anyone will “grant” them their constitutional entitlement to leadership aspiration in Nigeria and determine when their “turn” for national political leadership has arrived, are living in a fool’s paradise. This political inferiority complex could consign parts of Nigeria to second-class political citizenship and hamper the realization of an inclusive democracy in our country.

Our old, recycled politicians, with their incompetence and their tired, divisive politics, have failed. They have given us poverty instead of prosperity, unemployment instead of jobs, and a comatose economy instead of the wealth of nations in a globalized world. We must now reject them at the ballot box in 2019 and vote, based on merit and not the backward approach of “zoning” that recycles mediocrity, for a modern leadership that can take our citizens out of poverty and our country into the 21st century. The YPP presidential candidacy has a plan – rather than a mere promise - to do just that, plus a plan to execute the plan.