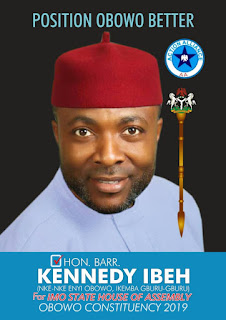 The Honourable Member representing the good people of Obowo Constituency declares to run for a second term to position Obowo better.


In an exclusive Press Release on Uncommon Representative a platform that unites all Obowo,  He stated:

"Great sons and daughters of Obowo, I bring you greetings in the Name of Our Lord Jesus Christ."

"In the past three and half years, I have never felt the depth of the desire of Obowo people to better position Obowo in the Imo State House of Assembly through experience and capacity than I have felt in the past few weeks. My phones have been well inundated with calls and text messages seeking my declaration under any political party following the crisis that bedeviled my erstwhile Party, the APC.

It gave me greater joy and deeper commitment having to receive in audience our people from different walks of life, groups and organizations I least expected who called on me to make my declaration to run for the Imo State House of Assembly. This to me, is a privilege and an expression of Gods will as it’s often said that the voice of people is the voice of God. I thank you all.

My former Party, the All Progressives Congress (APC) under which you elected me in 2015 fell into an infamous crisis that resulted in the resort to handpicking of candidates for the 2019 General  Elections, thereby denying those of us who had earlier been given Certificates of Return by the same Party, having won the primary election organized by the Party and witnessed by the relevant Agencies of Government as provided for by the relevant enactments.
Ignominously, in some cases, persons who never contested the Primaries were nominated by the Party and sent to INEC, and this underscores the whole injustice demonstrated by the APC to a lot of her members. It is now history!

I have insisted on running this election and returning to the House of Assembly in 2019 for the obvious reasons that firstly, Obowo would be better positioned with me as a Second timer (Ranking Member) having meticulously learnt the ropes in this first term and have become adequately acquainted with the politics of the Imo State House of Assembly and also grounded in the business of Law making.

Secondly, that I will do better for our people having been able to do the much I'm doing under the stark realities of this current administration.

My choice of Party does not in any way reveal my total inclinations, neither does it express my holistic reservations but expediency demanded and occasioned the position. The most important fact is that our people of truth now have a platform to re-elect me to showcase a legislative experience garnered in the face of ups and downs in the past 3 and half years.

Though I have consistently embarked on annual and emergency constituency briefings, this period of campaigns would be a veritable opportunity to showcase our achievements in this uncommon opportunity to represent Obowo in the State Assembly.

I urge us wise people of Obowo to resolve to position Obowo strategically by supporting me to provide experience in the representation of Our dear Constituency from 2019 to 2023.

God bless us all and favour us even as we healthily approach Christmas and of course the end of 2018."