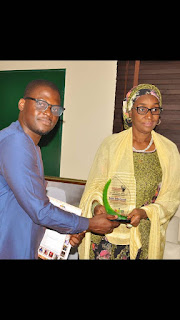 Mrs Sadiya Farouq, the National Commissioner for Refugees, Migrants and Internally Displaced Persons (NCFRMI) has pledged a strong support for Nigerians affected by humanitarian crisis all over the world.

The commissioner made the pledged while receiving an award of excellence from All Africa Media Network (AAMN), an NGO, on Monday in Abuja.

She said the welfare of internally displaced persons was necessary going by the mandate of the commission.

The News Agency of Nigeria (NAN) reports that AAMN had on Sept. 25 organised a conference on African Women Intercultural Dialogue held in Abuja.

The theme of the conference is: Calling African women and policy makers to action against human trafficking, force labour, domestic servitude and sex slavery.

According to Farouq, the award will spur her to stand strong and do more in the areas of finding solutions to humanitarian challenges facing internally displaced persons.

She said that there was no way human beings would not face challenges in the day to day activities as a result of searching for greener pasture.

Farouq, however, thanked the organisation for the gesture, pledging to support the NGO, particularly in the areas of human trafficking and internally displaced persons.

The award of excellent was confirmed on Farouq as a Nigerian, who has given prominence to the issues and challenges confronting the internally displaced persons in the country.

The NGO also bestowed a similar award on the Deputy Inspector General of Police in charge of training, DIG Emmanuel Inyang, for his campaign against human trafficking and civic violence.

Earlier, the Executive Director of the NGO, Mr Iwuoha Cookey, said that the awardees were recognised for their selfless effort towards the Nigerian government campaign against human trafficking.

Cookey said that the awardees had been on the forefront in the fight against human trafficking, sexual abused and servitude more than ever before in the recent time.

He congratulated the awardees for meriting the award and urged them to do more in their various endeavour. (NAN)
AG/AFA