INEC to partner with OMPAN, Imo chapter, on public enlightenment 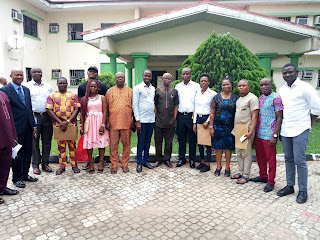 The Independent National Electoral Commission, Imo state, led by Professor Francis Chukwuemeka Ezeonu has expressed his intention to partner with members of the Online Media Practitioners Association of Nigeria (OMPAN) in the areas of media and publicity ahead of the 2019 general election.

Ezeonu made his intention known when members of OMPAN paid him a courtesy visit in his office today.

Speaking during the occasion, Ezeonu said he did not know that OMPAN had been established otherwise he would have reached out to the association long ago, adding that he met with the Members of the Nigerian Union of Journalists (NUJ) within the first month of his assumption of office in Imo state.

According to him, there are about 368,000 PVCs yet to be collected by their owners in Imo state, a development which he described as worrisome. Said he, “we have stopped all other exercise except the collection of PVCs and collection of PVCs will continue until one week to the election.” He said INEC may consider the option of stopping people from going into the polling booth with their mobile phones because incidents have been recorded whereby some voters use their phones to photograph the ballot paper after thumb-printing so as to use it as a ‘meal ticket’ to obtain money from politicians. He said INEC is also considering the option of increasing the distance from the registration point to the polling booth so as to make it difficult for a voter to show other people the information on his ballot paper.

He said some politicians are in the habit of cloning other peoples PVCs so as to vote multiple times, adding that such PVCs cannot be authenticated by INEC’s card reader. He said that out of all the countries in Africa, it is only Namibia that is practicing electronic voting and expressed optimism that “Nigeria will get there some day”.

Earlier, the Imo state chairman of OMPAN, Mr. Ebere Inyama said they were at INEC office to establish a working relationship with INEC and to offer the electoral umpire an opportunity to make use of credible online platforms in the process disseminating information to the general public in the months ahead.

Adding her voice, INEC’s H.O.D, General Administration and Procurement, Dr. (Mrs) Ann Iheonu urged members of OMPAN to publish news and information that can make the youths in Nigeria to be positive minded.

In a closing remark, the OMPAN PRO for Imo state, Mr. Franklin Uzowuru assured the Imo state REC that the new partnership between INEC and OMPAN will be of immense benefit to all Nigerians.