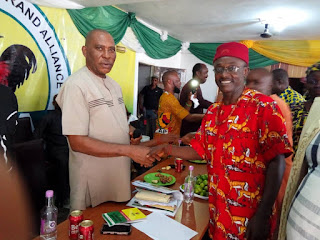 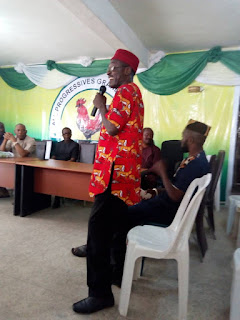 History was made on Tuesday August 28, 2018 at Imo state All Progressive Grand Alliance APGA head office on Egbu road, Owerri as Sir GoodLuck (Nwachukwu)  led over 500 CPP, ANC, PDP, and APC faithful to APGA.
Stating their intentions for joining APGA from their former political parties, Roland Ijeh(CPP Nkwere),Ugochukwu Ama (Mbaitoli CPP), Oliver Nwanne (Oguta CPP), Comr Uzo Nwachukwu (Oguta), Mrs Ofuru (PDP), Dr Okoro Onochiri (ANC Vice Chairman)and many others in their respective statements collaborated that after carefully studying the political terrain and critically analysing the potentials of APGA as well as the leadership style of the executive under Barr Petter Ezeobi they had no other option than to join a party that uphold the desire of the common man especially the identity of ndi Igbo.
In his assertion, Dr Nwachukwu who was the former CPP state Chairman and later ANC National Secretary said most of them were formerly in APGA before they left in 2013 and 14 respectively but with the great work of his long time friend who happens to be the state Chairman of APGA in Imo and his wonderful executive has been doing to make APGA the pride of Igbo’s in the State and beyond they were left with no other option to return and be part of an Epoch event that will change Governance for Good in the State.
The Nwangele born Community leadership Position in strong organizations including the Imo people’s Assembly IPA, among many others also said the number of decampees would have more would be joining them as they  have trusting his leadership style hence the followership.
In his welcome speech, the state APGA chairman, Barr Peter Ezeobi urged them to feel at home as the party belongs to every Igbo person commending them for taking a wise and worthy decision to join a party well positioned to take over power in all position including the senate, house of reps, governorship and house of Assembly.
In related development, the APGA State Chairman in Imo State, Barr Peter Ezeobi has assured all the party aspirants of a level play ground during the party primaries.
Barr Ezaobi who made the reassurance when some members of CPP, ANC, APC, AND PDP faithful decamped to APGA maintained that the party is founded in transparency insisting that every aspirant will at all time be given equal treatment and that the party will at the end chose a candidate.
Some of the state APGA Officials who witnessed the Oath of allegiance administered by Barr Ezeobi includes, pastor Alphonsus Eberendu ( Secretary) Hon Paul Ukaegbu (State Youth leader), Hon Steve Anyanwu (State Organizing Secretary),Hon Obasi Onyewuchi  as well as Nze ben IK Osuji an owerri Zone Senatorial aspirant among many others.