Consolidate The Democracy You Fought For - Prof Francis Ezeonu

on September 12, 2018
-Calls on the Media to Unite for  Free, Fair and Most Credible Elections

The INEC Resident Electoral Commissioner Imo State,  Prof Francis Ezeonu,  has charged media practitioners in the country to make extra effort to consolidate the democracy they fought for. He charged the media to unite for a free, fair and credible elections when members of OMPAN IMO State Branch paid him a courtesy visit.

"Come to think of it, our leaders who won independence for us,  achieved that feat as youths. They have held on to power and for too long our young people don't really want to get involved. Demographicaly,  the youths are more in number. They are  advantaged by their large number and would change the narratives, yet there is so much apathy among them.  Spending lots of energy and  time making noise on the social media and when it's time for elections,  most of our youths are not involved.
Most times, the electorate don't want to vote because they fear that it would be rigged.
It may interest you to know that next year election, your vote would surely count."
He averred. 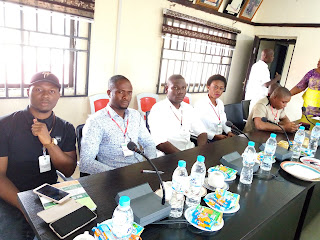 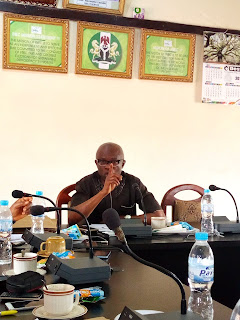 INEC has introduced  technology for voters registrations, authentication and transmission of results.  It would no longer be possible for anyone to rig election by snatching of ballot boxes. 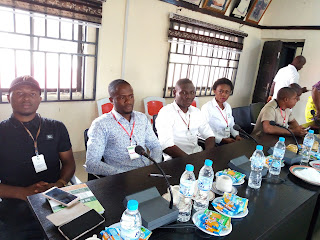 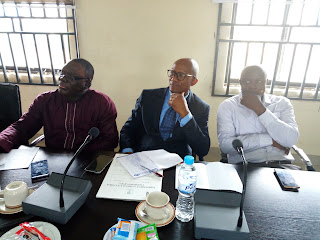 Making his remarks on the expectation of the media in the coverage of electoral process, Prof Ezeonu appreciated the pivotal role the media played in the struggle for independence as well as in the return to civil rule, and urged practitioners to ensure that they disseminate accurate and timely information to people of Nigeria.

Speaking today to members of  Online Media Practioner Association of Nigeria (OMPAN) , he charged them to always ensure they have a balanced reportage.

He lamented the spate of hate speeches and sensational journalism, adding that the press should use it's influencesl to enlighten the electorate.

"As a watchdog of the society, I expect members of the Press to always crosscheck their facts before dishing them out " pointing that efforts should be made to always present a balanced reportage of events.

Prof Ezeonu explained that electoral activities ran in three phases of pre-election, election day and post election and appealed to the practitioners to help out with the voter education, sensitization and mobilization of the electorate.

He expressed worry about the high number of unclaimed Permanent Voters Cards (PVCs)  in the state.

He assured media practitioners in the State that he would work within the ambit of the law and pledged his commitment to be honest, open and transparent in all his dealings in the state. Appealing on the practioners to also acquaint themselves with the knowledge of the procedures and the supporting laws and the legislative instruments that govern the actions of the commission.

He confirmed that the voters registration exercise is a continuous exercise but was suspended so as to have ample time to produce the Permanent Voters Card before the elections.

The members of OMPAN present at the media parley commended the REC for his transparency in running the affairs of the Commission and for his confidence building efforts. They promised to use their media platforms in ensuring there is proper sensitization of the masses. As opinion moulders, they would ensure positive attitudinal change of the electorate.

Talking to his social media handle, the publisher of  Arise Africa Magazine,  Ikechukwu Anyanwu  and  colleagues at Online Media Practitioners Association of Nigeria (OMPAN)  Imo State Chapter announced  the bold step towards reversing the trends  by forging a strong partnership with INEC  in the area of sensitization and mobilization of youths in the state so as to have the electorates more  involved in the electoral process.