2019: In Less Than Two Years, I’ll Achieve What Manager Couldn’t In 16 Years-Johnny Vows 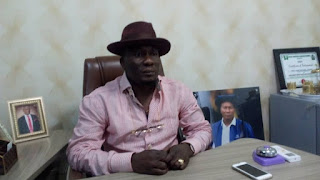 Chairman of Egbema, Gbaramtu Communities’ Development Foundation, EGCDF, Chief Michael Johnny has vowed that in less than two years in the Senate, he will achieve what the current Senator, James Manager couldn’t achieve in 16 years, if given the mandate to represent Delta South at the National Assembly in 2019.

Our Correspondent reports that Chief Johnny who is vying under the platform of All Progressives Congress, made the declaration Saturday September 15 while interacting with newsmen in Warri, Delta State.

He averred that he will surpass Dr. Emmanuel Uduaghan’s achievements as SSG and Governor of Delta State if he becomes Senator, insisting, “I’m the most qualified person having grassroots support to represent Delta South at the Senate in 2019”.

Chief Johnny while fielding questions from newsmen, quipped that he accepted the call of people of Delta South to come and contest in order to change the narrative of the prevailing poverty in the land, inadequate representation as well as lack of vision to attract development to the district.

He promised  to initiate bills that will reduce poverty and attract educational support to  Delta South as well as press for  the increase of oil revenue and other benefits due Delta South Senatorial District.

According to him, while in the saddle as chairman of EGCDF for four years, he was able to execute more than 116 visible projects, provide jobs and gave scholarships to people across communities under the foundation.

In a related development, National Association of Delta State Students, NADESSTU, Niger Delta University Chapter has awarded Chief Johnny the “Most Supportive and Student Friendly Personality of the Year 2018”.

Responding, Chief Johnny promised to sustain his empowerment of youths so as to make them look beyond criminality, just as he appealed to women to give him their support, assuring them of 50 percent appointments if he is elected as senator.
POLITICS