THE RE-ORGANISATION OF THE SARS UNIT OF THE NIGERIA POLICE 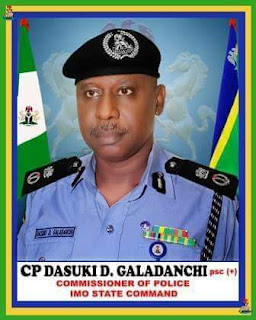 THE RE-ORGANISATION OF THE SARS UNIT OF THE NIGERIA POLICE

In line with the presidential directives and the Inspector-General of Police IGP Ibrahim K. Idris NPM, mni implementation on the re-organization of the Special Anti-Robbery Squad (SARS) nationwide, the Commissioner of Police Imo State Command CP Dasuki D. Galadanchi has warned all tactical teams operating in the state to comply with the directives.

The Commissioner of Police further directs that all tactical teams in the Command operating in plain clothes such as T-Shirts etc, should henceforth appear in their official conventional uniforms while conducting stop and search.

Members of the public are urged to report any police team or teams seen conducting stop and search within the state dressed in plain clothes through the Commissioner of Police Public Complaint SMS line No. 08106160007 or to the State Command Control Room distress call line 08034773600