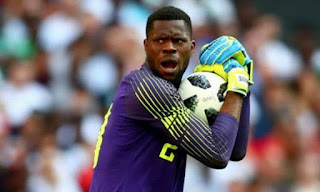 Spanish Segunda División side Elche CF have reported on their official website that they have agreed a deal with Deportivo de la Coruña for the transfer of Super Eagles glovesman Francis Uzoho.

Subject to a routine medical scheduled to take place on Monday, August 27, the Nigerian will join Elche on loan for the remainder of the 2018-2019 season and is expected to begin training with his new teammates next week.

Uzoho must have caught the eye of Elche on the back of his performances for the reserve team of Deportivo de la Coruña last season and on top of that, he was in goal for the Super Eagles at the 2018 World Cup, posting a shutout against Iceland in their second Group D match.

The 19-year-old entered into the history books last season when he became the youngest ever foreign goalkeeper to debut in La Liga, aged

Uzoho was playing for the Aspire Academy before he was spotted by Deportivo de la Coruña .

He received his first call up to the Nigeria National Team for the games against Algeria and Argentina in November 2017.
Sports