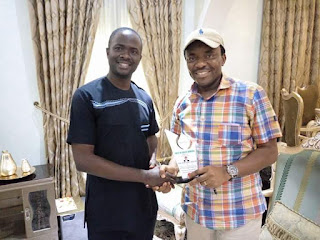 He was born on November 15th 1972 in Umuokeh Obowo. He is the first of five(5) children of Eze  Ifeanyichukwu John Okafor and Ugoeze Victoria Adaku Okafor. He is a crowned Prince of Umuokeh Kingdom in Obowo Local Government Area of Imo State.

He first took up employment at All States Truest Bank as a banking officer in 1999-2002. In 2002 he became a senior officer in Oceanic Bank and moved on to being a Senior Manger in Zenith Bank from 2005 to June 2011.

He started his political career as the Finance Commissioner of Imo State from June 2011 to October 2014. In 2015 he became a member of the Federal House of Representatives under the platform of All Progressives Congress (APC) Political Party.

Hon. Deacon Chike John Okafor is the Chairman House Committee on Healthcare Services; he also chairs various Ad-hoc Committees like, Committee on Non-Oil Revenue and Remittances. He is also a member of various committees such as, Committee on Appropriations, Finance, Health Institution, Agricultural Services, Rural Development, Housing and Aids, Tuberculosis and Malaria Control.

Hon. Dcn. Chike John Okafor has sponsored about four (4) bills and thirteen (13) motions so far in the House of Reps.


BILLS
1. A Bill for an Act to Repeal the Counterfeit and Fake Drugs And Unwholesome Processed Foods (Miscellaneous Provisions) Act Cap C34, Laws of the Federal of Nigeria, 2004 and to make Comprehensive Provisions for the Prohibition and Control of Counterfeit and Products, 2012 (Remark-Still in the House).

2. An Act to Establish the Institute of Customer and Commercial Accountants of Nigeria and for other Related Matters Connected Therewith. (Remark-Still in the House).

3. An Act to Amend the Dangerous Drugs Act Cap DI Laws of the Federation of Nigeria, 2004 to give Powers to the minister of Health to Regulate Certain Classes of Drugs, Allow Arrests to be affected by the Members of the Public and Review the Prescribed Penalty provided under the Act; And for Related Matters. (Remark-Passed, Waiting to be Signed into Law by Mr. President)

4. An Act to Establish the Charted Institute of Customer Relationship Management to be charged with the Responsibility for Registration Discipline of its Members, to Regulate and Control the Practice of Customer Service Profession and for Related Matters Connected Therewith (Remark-Passed, Waiting to be Signed into Law by Mr. President)


MOTIONS
1. Tobacco Pandemic in Nigeria and urgent need for Implementation and the Enforcement of the National Tobacco Control Act Passed in 2015
2. Decayed infrastructure in Nigeria Boarder and urgent need for intervention.
3. Urgent need to interne on the Deplorable State of Health Care Service Provision in Nigeria Prisons.
4. Urgent need to Avert National Health Crisis through adequate funding and Revitalization of the Primary Healthcare System (PHCs) in Nigeria
5. Urgent need to Investigate the Compliance Rate of Health Maintenance Organizations (HMO’s) to NHIS Contributions and Utilization of funds by the Healthcare Providers and Inhumane  Treatment of Enrollees:
6. Absence of functional Modern Scanners at the various Port Terminals in Nigeria.
7. Urgent need to stop the Embarrassing outbreak of Lassa Fever Virus in Nigeria and the need to step up the fight against further Spread and Loss of lives.
8. Urgent need to investigate the unpaid Contracts by the Federal Government and its agencies to Local Contractors
9. Urgent need to address lopsidedness in Appointment into the Administrative/ Management of the Niger Delta Development Commission (NDDC) in Breach of Section 4 of the NDDC act
10. Urgent need for intervention on abandoned Owerri Port Harcourt road and the need to complete its Rehabilitation:
11. Urgent need to encourage voluntary blood donation to the National Blood Bank and to Avoid Continuous Loss of lives as a Result of Non-Availability of blood in emergency situations
12. Urgent need to treat Accident Victims and Victims of Emergency without subjecting them to Hospital Protocols.
13. The need for immediate protection of witnesses who testify before House Committees: the Case of suspension of the Executive Secretary of NHIS.
In addition, his committee has held several public hearings.

Hon Okafor is an  Internationally acknowledged resource person /public speaker Some of his  outings in this regard include; keynote Speaker in the 2016 Annual conference of Nigeria Political Science Association South East Zone.
Keynote speaker Federal University of Technology Owerri 2016 Centre for Innovation exhibition week.
Guest Lecturer Academic Staff Union of Polytechnics (ASUP) Federal Polytechnic Nekede 2017 Conference
Guest lecturer, University of Surrey, Guildford United Kingdom March 29th 2017 public lecture.
Guest Lecturer Eastern Kentucky University, Richmond Kentucky, United States of America April 6th 2017  Public Lecture among others.
Among is his numerous awards, Hon Chike Okafor is 2018 most dedicated Committee Chairman in the House Of Reps. An award giving to him by those whose follow the proceedings of the House daily : House of Representatives Press Corp in Conjunction with Nigeria Union of Journalists. Hon. Okafor often referred  to by his admirers as  “ The Tireless Voice of Okigwe South”

Hon. Dcn Chike John Okafor is a devout Christian and a man of proven integrity.
He is a Deacon of Christ Embassy Church Owerri. He is a prosperity preacher and has a following that can testify to the goodness of God through Him. He is happily married with three (3) beautiful children.
NEWS POLITICS Profile