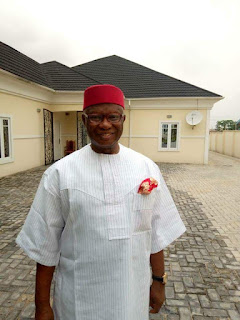 In life some leaders are born great,  some have greatness bestowed on them by providence  while some achieve greatness by hard work,
Onuzo Chudi Raphael is indeed a rare combination of these three phenomenal traits.

Born on 14th June 1945, Chudi  comes from Ubulu in the Oru-West LGA of Imo State, Nigeria.

Sir Barr Chudi Onuzo has risen to the pinnacle of greatness and stardom. Propelled by the virtues of hard work, honesty and an unalloyed faith in God.

Among his academic &  Qualificationsare the following:

He is a professional Icon of superlative class, a pace setter and an accomplished administrator.

In addition to the administrative and executive positions in the broadcast media, he is also well known as an accomplished interviewer, news caster and a programme moderator.

Sir Chudi Onuzo is a veteran journalist. He is a  Fellow, Nigerian Institute of Sales Management

Member, Full Gospel Business Men's Fellowship International and many others

Sir Barr Chudi Onuzo is a meticulous and articulate administrator.
He pioneered the establishment of the following organizations and managed them effectively

Co -Founder Guardians of The Nations International & Chairman Board of Trustees. 1996.

In Politics, Sir Chudi has  blazed like a legend. He was running mate to Chief Martin Agbaso in 2007 under APGA

He was the immediate past Chairman of All Progressive Grand Alliance (APGA).

Sir Onuzo has made substantial contributions to the development of  the Amadehi, Ubulu community in the Oru-West LGA of  Imo State.

In recognition of his selfless services to humanity, Sir Barr Chudi Onuzo is a recipient of an avalanche of International and national Awards.  All through his life, he  has remained a dedicated and committed Christian.  He is  a member of the Sacred Order of the Knights of St. Christopher  of the Anglican Communion.
He has been a regular preacher , teacher,  motivational speaker over the past thirty -five years and  has delivered over two hundred talks, lectures, papers and sermons.

Distinguished Ladies and Gentlemen we present to you,  Sir Barr Chudi Onuzo  a distinguished, illustrious and celebrated Nigerian.

Congratulations from all of us at Face Of Arise Africa
Profile