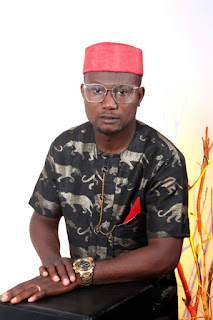 Hon. Desmond Uzoma Egbuchiki (De Bill) was born on 11th , Nov to the humble family of  Amb  Prince Clement Egbukichi& Star Mrs. Anna Egbukichi of Umunachi in Obowo Local Goverment Area of Imo State, Nigeria. He is the Seventh  child of his parents.

In 2002, he  began his tertiary studies at University of Illorin,  Kwara State. In 2004, he graduated withOrdinary National Diploma (OND) in Political Science .

With the academic curiosity of St. Aquinas, he further enrolled to study Information Technology at IPMC Accra, Ghana.

Soon thereafter his graduation, he went into business in 2006

During his days as a student, he had at different times held the positions of:

Publicity Sec of Political students of Union of Uni- Ilorin.


BUSINESS:
Propelled by hard work and the desire to be self reliant and to serve the people, Hon. Desmond Egbuchiki rejected white collar jobs and went into private business. As providence will have it, it did not take him long to demonstrate wit and make his mark as a businessman. He started with African Fabrics,  Designers, ICT, Office Equipments and Furnitures.


As a business guru with a broad mind for growth, he further expanded his business tentacles into the hospitality business and Media. His multiple ventures include Despee International, Sommies Limited,  Gcfn Consults.  and etcetera.

POLITICS:
Hon. Desmond Egbuchiki forayed into active politics in 2014 with All Progressive Grand Alliance (APGA). He is a grassroots politician, introducing the concept of bringing politics dividends of democracy to the people via human capital development. He has so far demonstrated astute political followership and humility; traits which has continued to endear him to the masses and the political elites. He is a good party man with a stint of die hard followership. He is presently an aspirant of Young Progressives  Party  (YPP). He has built a political bridge that cut across all the Local governments in Imo State. 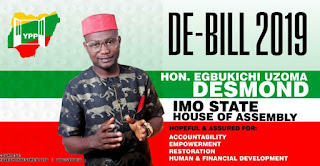 In 2019, with the help of God Almighty he would be gunning to be elected as member representing Obowo State Constituency in the Imo State House of Assembly. He is know for his generousity and would use  his position to serve the people and has vowed not to be cocooned by the paraphernalia of the office.

He is seeking to be  elected and based his campaign on the following Accountability, Empowerment,  Restoration,  Human and Financial Development.

He is a trailblazer and known for his performances, pace setting achievements and for the faith he keeps with Obowo people.

SOCIAL LIFE:
He is one among the most accessible politician ever known to mankind. He has a listening ear with helping hands.  A philanthropist per excellence. This goes to demonstrate his acceptability by his people today.

He is happily married to Chiamaka N. Egbukichi and the family is blessed with a son - Kamsi Richmond Egbukichi
Profile