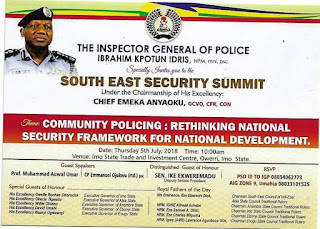 2. The Summit will attract Eminent Personalities from the South East Geopolitical Zone under the Distinguished Chairmanship of:

Royal Fathers of the Day:
­ All the Chairmen of the South East Council of Traditional Rulers

3. Consequently, it is the honour and privilege of the Commissioner of Police Imo State, CP Dasuki D. Galadanchi, psc (+) to invite Government Appointees, Traditional Rulers, Eminent Persons, Civil Society groups, the Media, Women Leaders, Youth Leaders and all stakeholders in security matters, etc to the summit as follows:

4. Your cooperation in this regard is solicited as you join in welcoming the Inspector – General of Police to Imo State.