on June 10, 2018
A bizarre video which has gone viral on the internet shows a popular Ghanaian man of God somersaulting in his show of excitement when a member announced a 'powerful testimony'. 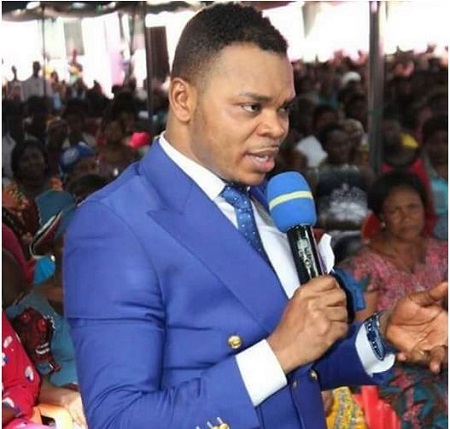 Controversial Ghanaian man of God, Bishop Daniel Obinim has got people talking after he did something very dramatic and unusual when a member announced that he won over two hundred and thirty billion Naira with a lotto number he gave him.

On hearing the figure, Obinim is the head Pastor of the International Godsway Church in Ghana took to the floor of his church to celebrate in acrobatic summersaults.

Despite the skepticism of Christians towards lottery and sports betting, the Bishop often gives his church members lotto numbers, sometimes through the ‘spirituarr’ realm by entering their dreams.

A member of the his church then played the game and surprisingly won himself 3 billion Cedis which is N230,325,075,600 when converted to Nigerian currency.

The ecstatic clergyman could not believe his ears when the lucky man came to give testimony in church that he somersaulted thrice.
NEWS