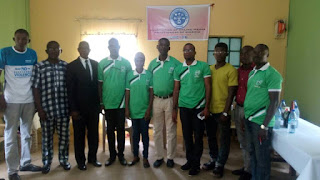 Few months after a grand-style inauguration of the Lagos Chapter of the Association of Online Media Practitioners of Nigeria, OMPAN, another feather was yesterday added to the Association’s cap with the launch of Ekiti state Chapter at the Nigerian Union of Journalists,NUJ Press Centre in Ado-Ekiti, the state capital. 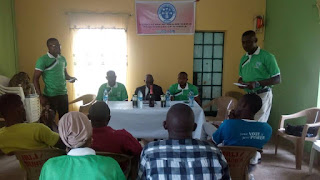 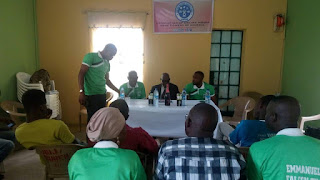 Inaugurating the Exco in the presence of the Chairman and entire leadership of NUJ Ekiti state Chapter, the Deputy National President, Southwest Zone of OMPAN, Mr. Peter Jones Ailuorio  while giving his opening remarks urged the State Chairman of NUJ, Lion Rotimi Ojomoyela to give considerable support to OMPAN in Ekiti to 0perate.
He said: "when I arrived Ekiti, the NUJ Chairman gave me a handshake and I appreciated him. But what I want, is that instead of just a handshake, I will want an embrace from him".

While addressing the new Executives to be inaugurated, Mr. Ailuorio said, "The essence of my coming to Ekiti is not to inaugurate this Chapter to be in contention with the NUJ state Chapter but to work with it in synergy for the advancement of the Journalism profession."
Further said he: “I make bold to say and to caution that even after your inauguration, you should see yourselves as an offshoot of the Ekiti State Chapter of NUJ. The national leadership of OMPAN has not come to inaugurate the State Chapter so that you begin to wrestle with NUJ in Ekiti; No, you are to work in co-operation with the Union. But then, I appeal to the State Chairman of NUJ in Ekiti State not to make OMPAN subservient to the parent body in the state but rather allow it to work in tandem with NUJ in the State so that together, we can move Ekiti forward for the good of all".

In his remarks, the Ekiti State Chairman of the Nigerian Union of Journalists, NUJ, Lion Rotimi Ojomoyela advised the newly inaugurated OMPAN Executives to be disciplined and not to be involved in blackmailing people, because in his words,”when people outside are blackmailed; it is the NUJ State Secretariat that they will come to verify and ask about the person involved in the blackmailing. He also promised that the door of Ekiti NUJ will be opened to accommodate the Ekiti OMPAN chapter as canvassed by the deputy National President of the SW Zone, Mr. Peter Jones Ailuorio.


The list of the newly inaugurated Exco which the Deputy National President of OMPAN, SW said will function for only one year after which another election will be conducted for a new set of officers to run the affairs of the Association includes the following: