Save The Country, Restructure It Now-- Southeast Leaders 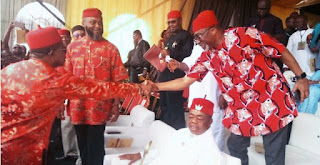 Igbo leaders across the southeast states have resolved, among other things, that Nigeria must be restructured to a true federal state to redeem her from her many problems.

In his opening remarks, the Ahaejiaga mba of Igboland reminded the people of its rich cultural heritage. A reflection on the past, the present and need to chart a new cause for the bright future of Ndi Igbo was shared by Chief Dr Emmanuel Iwuanyanwu

Professor Chukwuma Soludo, speaking during the summit  proposed single term of six years for president, that the proscription of IPOB be rescinded, and a constitution review to bring about a regional system of government and resource control.

Speaking today at the Restructuring Summit in Awka, Deputy Senate President, Ike Ekweremmadu said he stood by his colleagues of the southeast in adopting the position on restructuring. He said that he would be at the fore front of the bill at the national assembly.

Ekweremadu opined that the resources in Nigeria were enough to make Nigeria the greatest nation in the world if only she could sincerely adopt restructuring.  In his words, “we will network with our brothers and sisters from other parts of Nigeria, carry everybody along in the exercise and engage those not sufficiently convinced that Nigeria will be greater if restructured.”

Professor Jerry Gana, a former federal minister of information, speaking with the press later on, said that it was for the rest of Nigeria to consider the proposals of different parts of the country, and see which one is really good for a greater country. “Let us agree and restructure Nigeria for the security and development of Nigeria. The democratic position is to allow for dialogue and freewill discussions that will arrive at a beneficial conclusion for the benefit of all.”

Gana also advised that the national assembly be allowed to discuss the issues and refer them for public referendum before they pass the bill to law. “We should allow ourselves to listen to one another and not to do anything by force,” he said.

In the view of Senator Victor Umeh, he was happy that the issue of rearranging Nigeria had refused to leave the headlines. “The South South, Middlebelt and the Southwest are also organising themselves for this. “The military constitution we are using now is the root of all our problems. It is a fraud and must change. That is why we need to review it urgently. The way forward is to accept that the current constitution was set up by General Sani Abacha and foisted on the rest of the people. The unity of the country remains at risk if we do not restructure,” he said.

Ayo Adebanjo, leader of the southwest sociocultural group, Afenifere, said that restructuring was being proposed “because we love ourselves. Without restructuring we are only paying lip service to national change.” He rhetorically asked the opposers of restructuring if they could be wiser than their founding fathers – Sir Ahmadu Bello, Chief Obafemi Awolowo and Dr. Nnamdi Azikiwe – such that they are hesitant to restore the country the way those founding fathers set it up. He congratulated the Southeasterners for taking a stand on restructuring and encouraged them to stand firm in their resolution and not allow the notorious “Nigerian factor” to foul it.

On his part, Chief Edwin Clark, a South South leader and a former federal commissioner (minister) for information under General Yakubu Gowon said that the youths should be carried along in the process. According to him, “the youths have been treated very unkindly by the federal government of Nigeria.”
NEWS