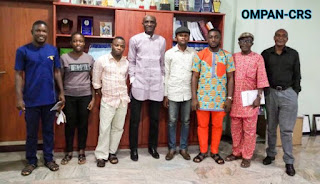 The Speaker of the Cross River State House of Assembly, Rt. Hon. John Gaul Lebo has agreed to work with the Online Media Practitioners Association of Nigeria, OMPAN.

Hon. Lebo made this known on Tuesday when the Cross River State chapter of OMPAN, led by her chairman, Comrade Efio-Ita Nyok, paid a familiarisation visit to his office in Calabar, the state capital.

The Speaker commended the members of the association for their resillence in desiminating information despite unfavorable conditions. Adding that Cross River State youths innovative prowess is growing beyond imagination. He said ” about 65% of Cross state’s youths fend for themselves, while about 15% are been taken care of by the government and this is despite the over 5000 appointment made by his excellency” according to the Speaker, the statistics is commendable”, He added that, “the Governor Ben Ayade led Administration is building a future agenda to bridge the innovation gap”.

He went ahead to say, information today is critical, and “the era of government controlled media is out gone, following the technological evolution. Therefore, as a Legislature, we have no option than to open the information space”.

The 8th Assembly Speaker said, “I want to leave the House more open to the New Media”, adding that, “15 Bills passed by the Cross River State House of Assembly are already available online and in June, one of our seating will be streamed Live”.