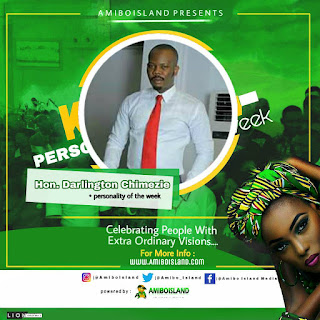 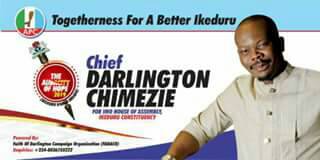 KUDOS TO AMIBO ISLAND PERSONALITY OF THE WEEK: Behold, Hon. Darlington Chimezie; A Man Whose Vision Is Worth Applauding


Humanitarianism is an active belief in the value of human life, whereby humans practice benevolent treatment and provide assistance to other humans, in order to better humanity for moral, altruistic and logical reasons. It is the philosophical belief in movement toward the improvement of the human race in a variety of areas, used to describe a wide number of activities relating specifically to human welfare and in most cases, give up their very last just to help others. This is a Typical Description of the Man Darlington Benjamin Chimezie.

Chief Darlington Chimezie is An accomplished Enterprenuer, Businessman, Humanist, who rose from the ashes of socio-economic limitations to become a towering testimony to fruits of hard work. He is a trailblazer, an asset to our fatherland and a source of blessing to humanity.

Every chapter of Darlington Chimezie's sojourn on earth contains elegant description of a man who is poised to make a positive difference. A description of a Young man who loves his people so dearly that instead of Living the non-challant life of a young man in his prime, He chose to answer the call to serve. To love a nation is the call of the heart and only those who understands the need to answers it.

Chief Darlington Benjamin Chimezie's drive to save lives, alleviate suffering, and promote human dignity in the middle of man-made or natural disasters is second to none. No wonder The Ikeduru Born Philanthropist Was bestowed with Imo State Government's highest honour as the 2017 OUTSTANDING HUMANITARIAN OF THE YEAR for his service to God and mankind.

The Honorable MD of Casa Mimosa Hotels & Suites and founder of Faith Of Darlington Foundation has through the NGO empowered thousands of Ikeduru Youths and Women, giving grants for small scale businesses , helping in community development and assisting the less privileged in our society. His annual Healthcare programs for the sick, Football Tournament for the Youths, Skills Acquisition Training to equipp our Youths and women to be self reliant, as well as scholarships programme for those who can't fund their academic pursuit distinguished him among his contemporaries.

No wonder, the whole of Ikeduru LGA are beckoning on their son, Chief Darlington Chimezie to represent them at the Imo State House of Assembly.

It's cheering news to note that Mr Chimezie has accepted the offer from his people and so declared to continue serving God and humanity, as he has officially declared to represent Ikeduru State Constituency using the All Progressive Congress, APC, platform as a political party to realise his dream of greater works for his community of Ikeduru Local Government Area  To continue with his sterling.

Certainly, Ikeduru LGA Is Pleased Blessed To Have A Son Like You & Wouldn't Wait to give You Their Mandate!

Goodluck & Congratulations to You On Your Enviable Achievement
Gist