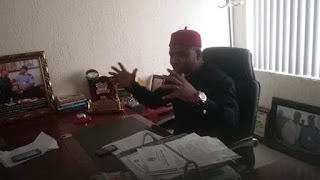 The resumption of Legislative Business of the IMO State House Of Assembly was greeted with an all important motion sponsored and moved  by Nke Nke Enyi Obowo and member representing Obowo, Hon Barr Kennedy Ibeh which, urging the Governor of IMO State to very urgently intervene in the dire need of the IMO Rescue Market otherwise known as and called the Malaysia Market at Umungwa Obowo.

The astute Lawmaker called on the Governor of IMO State to consider as a matter of State urgency, the need to improve the infrastructure of the Market, stressing that the Market being the mainstay of the people's survival within that region is menacingly threatened by certain natural  hazards due to poor infrastructure.


He noted that the market is open to attack by the deluge emanating from the IMO River beside the Market as a result of lack of construction of embankment protecting the market from the River. He also made a case for the creation of decent motor park as well as the construction of pathways for flood control which is also one of the problems affecting the growth of the Market.

It is recalled that the Legislative Behemoth played a very pivotal role to the construction of the Malaysia Market by the IMO State Government while assisting Hon Dcn. Chike Okafor, IMO State Finance Commissioner (as he then was). The NkeNke Enyi Obowo has since the construction followed closely developments in the market in his commitment to witnessing its growth, hence, the Motion which recorded no dissenting voice in opposition as it was moved.

While entertaining questionnaires from the Press, the Hon Member thanked the Governor first for fulfilling his promise of constructing the Market and congratulated him on his efforts to ensuring that Owerri is brought within the definition of a Modern and Developed City.

Whilst entertaining posers from the Press, he was confronted by a young man identified to be an Obowo son who has very urgent need to undergo an eye surgery at the UNTH Enugu but had no funds to undertake such major surgery. In a public show of compassion which he couldn't hide, he offered a *cheque of 250,000 (two hundred and fifty thousand naira) in favor of Mr Nwoke Nnamdi* for the eye surgery and also offered to sponsor him and whoever would be leading him to Enugu for the surgery.
NEWS