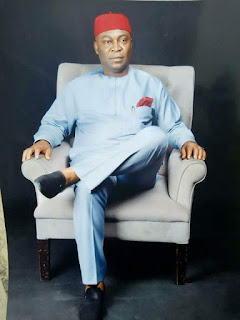 Former Secretary to Imo State Government and Chieftain of the Peoples Democratic Party (PDP) has described reports both in the newspapers and social media, that he is contesting the Okigwe Senatorial seat, even when he has not issued any official statement to that effect, as a reflection of the wish of the people of Okigwe senatorial zone.

Okewulonu pointed out that though he is under intense pressure from the people of Okigwe zone, associates, friends and party stakeholders in the zone, to declare his interest for Okigwe senate seat, he is still consulting widely and seeking God’s guidance before he can take any decision. He said that it is God and the people that will determine whether or not he can contest.

According to him, “if I am to contest, it will be to render service to the people. I am contented as I am at the moment but if Okigwe zone insists I should be their armour bearer in the senate and God okay’s it, who are my to go against my people’s wish?”

He described the recent newspaper publication in Daily Horn newspaper as “the voice of the people, “noting that though he was neither aware of the sponsors of the story nor how it came about, he still remains grateful to whoever put it up. “Everyday, the pressure on me to run increases. I have been  inundated with calls, text messages and visits by all classes of people in  Okigwe zone, yet am taking my time. To me, the recent newspaper publication is a reflection of the voice of the people,” Okwulonu stated.

The two-time secretary to the Imo State Government and erstwhile Federal Commissioner for South East Zone in the Fiscal Responsibility Commission, Abuja, further explained that his insistence on God’s guidance and consulting widely is to enable him make a rational decision in the interest of Okigwe Zone.

He expressed his immense gratitude to all those who in one way or the other, have been clamoring for his declaration, assuring that at the appropriate time, he will provide answer to their demand.

“I am a very meticulous person, who is not given to rash or bandwagon action. My interest is for a better and greater Okigwe. If I am convinced that my people want me in the red chambers, I assure you that I will do the needful,” Okewulonu averred.