UGWUMBA UCHE NWOSU EMBARRASSED BY THE LOVE AND CONFIDENCE OF IMOLITES, PROMISES NOT TO DISAPPOINT THE PEOPLE 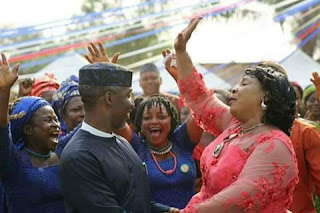 The Chief of Staff, Imo State Govt, Ugwumba Uche Nwosu has spoken for the first time since after the unprecedented endorsements from across political groups and interest groups, urging him to run for the governorship position in the State come 2019.

The humble and highly efficient administrator, political leader and development expert bared his mind to some journalists over what he described as unexpected show of love and solidarity from Party members and people of Imo State, noting that he never knew that such a thing was in the offing till one local government after the other started coming to the Government House to inform the governor of their decision to support him for governor. The Chief aide to the Imo State governor and former commissioner said that he remains humbled by the people's goodwill.

According to him; "People say I am a good man, that I have done one good thing or the other for them. Others say I have empowered thousands of people in the State and beyond, but I think I am just being true to my vision. I am just living my life. My life is about service to the people, about lighting paths that were dark and opening roads that were closed. I don't do good because I want to be praised or endorsed for higher positions, but because it is my life. I even feel that I haven't done enough, and I will never feel I have done enough."

Nwosu, who has received the endorsement of more than 20 LGAs out of 27 LGAs in the State maintains that he will speak at the right time on his next political move, assuring however that he will never disappoint Imolites who have reposed so much confidence in him and shown him so much love.

Pundits believe that this is the first time Nigeria's Fourth Republic that the people are driving the political process, especially as it affects whom they want to hold a powerful position as the governorship of a State.