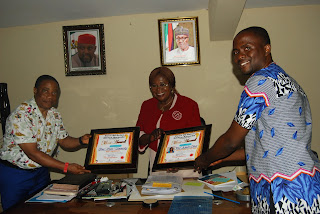 
The Arise Africa Awards, an initiative by the publishers of Arise Afrika Magazine is an annual event meant to celebrate distinguished personalities and best brands.

Arise Africa Magazine has been highlighting certain happenings within and outside the country.
The magazine has been raising the beautiful continent of Africa.
It is yet another season to celebrate people, places and values.
Our spotlight today  is on  Prof Mrs Adaobi Obasi as she baged Educationist of The Year Award!!!

Leading to Arise Afrika rolling out it's drums to celebrate this distingished, erudite scholar. This celebration was indeed remarkable as friends and well wishers from all walks of life gathered at Benchmark Hotels, Owerri Imo State where the event held.

Awards were also presented to deserving individuals, groups and organizations.

It is a well known fact that since the inception of her administration, IMSU has witnessed lot of massive development.

Today Arise Afrika Team visited lots of sites on campus and gave kudos to the Vice Chancellor who is working tirelessly to make sure the dreams of Imo State Government of ensuring the Institution remains the best is achieved.

Professor Victoria Adaobi Obasi was born to the family of Chief Fred and Ezinne Felicia Nnoham of Ogboko, Ideato South LGA of Imo State in the fouth quarter of the 20th century. She had her primary Education into Holy Rosary Primary School, Oguta from where she gained admission into Holy Rosary Secondary School, Ihioma Orlu and in 1971 came out in flying colours. She proceeded to the prestigious Alvan Ikoku Colledge of Education, Owerri for her Nigeria Certificate of Education (NCE) and completed her National Youth Service Corps in 1981. Her unquenchable thirst for academic excellence saw her enrolling into the famous University of Hull, England where she obtained her B.A (Ed) 1984, MA (Ed.) 1985 and capped it with a Ph.d in 1989.
Professor Adaobi Obasi, a scholar per excellence and repute won consecutively three times the University of Hull Bursary Award for Excellence in 1987, 1988 and 1989 respectively. It will interest us to note that Professor Adaobi Obasi is a prolific writer who has authored five books and forty-five journal articles in reputable National and International Journals. Her quiet and effective academic productivity, dignity and decorum never went unnoticed by the highly cerebral observant Governor Rochas Okorocha who picked her from the University and made her Imo State Commissioner for Education where she supervised and superintended the newly introduced Free Education Programmer of the State in 2012. When the Local Government Administration was almost in shambles, she was picked from the Education Ministry and sent to Ministry of Local Government and Rural Development where she earned the respect and confidence of the Chairmen of the various Local Government Areas and there was transparency in all her dealings with them as testified by all of the,.
On the 18th of December, 2012, the Public Servants and Civil Servants voted her the best Commissioner of the year which attracted a substantial donation from the Chief Executive of the State. Professor Adaobi Obasi has been a member of the Governing Council of Imo State University, a member of Senate, External Examiner to many Universities and other higher institutions, Secretary General, National Association for Women in Academics, a great mobilizer, once a Sub-dean of faculty of Education, Director, Women and Gender Studies, all of Imo State University.
She is a philanthropist and an active member of many professional bodies; National and International such as- Nigeria Academy of Education, Curriculum Organization of Nigeria (CON), College of Preceptor England (CPE) and World Council of Curriculum and Instuction (WCCI)
Let us remove our searchlight from Professor Adaobi Obasi for a while and bean it on a man who has ensured that all the glowing tributes we have showered on Professor Adaobi is well deserved. HE is Sir (Chief) Charles Medo Obasi of Dim-Na-Nume in Nwangele LGA, who sought the hand of the beautiful damsel from Ogboko called Victoria in marriage and this was consummated in 1978 to the glory og God. Chief Obasi stood behind his wife through thick and thin, encouraged and financed her education till she reached her goal as professor which is the zenith of academic excellence.
Mr. Chairman, very distinguished academics, ladies and gentlemen, If I desire to move further in eulogizing the sterling qualities of this Amazon called Professor Victoria Adaobi  Obasi, time may not permit me. Kindly join me in standing ovation to welcome a vivacious lady, a woman of high achievement, a reconciliatory, a mother per excellence, a quintessence of beauty, an epitome of womanhood, an accomplished Administrator, a grand-mother, a guru in the field of Curriculum Studies, a  Lady of the Knight of St. Christopher, a lady whose name opens doors, Daada to kith and kin, a deeply religious woman who cherishes mankind, a lover of peace whose words are always true, so carefully selected, softly spoken and precise. An Acting Vice-Chancellor Imo State Univeristy, Owerri, Professor Mrs Victoria Adaobi Obais – Ahia zuwa!
Photo Credit: Onyedikachi Chimeziey
Face of Arise Afrika Pageant/Awards 2017 Gist