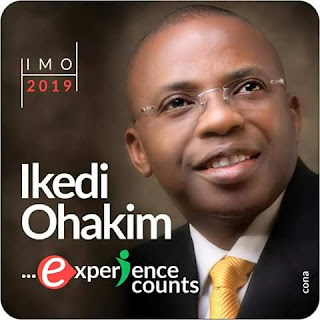 "I'm not primarily interested in short-term benefits in everything I do, I take into consideration the long-term merits and even when we managed the affairs of our dear state, every project, every policy was targeted towards not just the short-term relief but also the long-term.
The Clean and Green Initiative for instance though an instant success which transformed Imo to the cleanest state in the Federation wasn't just about the immediate but was a long-term continuous programme which had benefits that far outweighs it's major focus of ensuring a clean and healthy environment for all of us but was an avenue for job creation and even revenue generation when we engage firms like Mazi Ukonu and his recycling outfit which can turn our waste into money.


The few roads the little resources available to us could construct, we ensured we gave our people the best that would only need maintenance in ten to fifteen years as is evident in roads like Egbu Road or Yar' Adua drive amongst many others constructed almost 10 years ago and still stand strong today. Our focus was to address roads gradually as money became available to us but at the same time ensure that the wellbeing of our people such as salaries, pensions and gratuities were paid timely.
The Oak refinery project was planned and designed to put Imo State on the map as not just an oil producing state on paper but also bring physical presence into the state. It is painful that the benefits enjoyed by other oil producing states isn't enjoyed here in Imo State as we hardly even have oil firms with offices here which would have brought tax revenue to the state, jobs for our youths especially those in the oil producing areas as well as develop the basic infrastructure and amenities of the host communities. You cannot achieve that by the wave of hand or by making empty promises rather you achieve through planning and projection towards the long-term.
The Oguta Wonder Lake Resort would have effective put Imo State on the global tourism map dwarfing places like Obudu and other tourist resorts in the country if we had gotten the chance to finish it. We never planned to demolish or relocate Eke Ukwu unlike some propaganda some disgruntled people tried to sell rather we had laid out plans to decongest street trading in the area and remodel the place to be able to accommodate all the traders in a closed space where people can access with ease.
The high-rise parking lot complex at Ama JK was our vision which was copied but because it wasn't an original idea by those who copied it, had remained at foundation stage for seven years now whereas we had a three year plan to get complete it and open it to the public.
In education as in everything else we did, we desired qualitative education whereby our children can defend their certificates. We didn't create unemployment by sacking everybody claiming we are saving money rather despite the little we had, we employed more unemployed youths and made proper plans to ensure they would be productive and well paid.
We had already made consultations and negotiations with private partners to revive most of our moribund factories, many of them built during the time of Chief Sam Mbakwe as governor but left to fail by successive military administrations. With our financial constraints at that time, we needed proper planning on the long-term to get our vision to work and we were doing the best with what was available to us.
My dear brothers and sisters, as at 2007 to 2011 petroleum which still is Nigeria's major source of income sold at a very low price in the international market dipping to about $35 per barrel at a point and at the same time we were making contributions from our allocations towards the repayment of the Paris Fund debt which the refund of the money my administration and that of Chief Achike Udenwa paid, is being enjoyed by a few today. We were constrained financially to achieve our vision in a hurry and had laid out a plan that would take us there with as little pain on our people as possible at record time. If we had the bumber allocations available to Imo State in the last seven years back then, within three years, Imo would not have to depend on Federal allocations ever again to meet her internal and even external responsibilities because we would be very capable of generating our own revenue and meeting our obligations from there while the Federal allocation could then be diverted to major infrastructural developments in the state. That was our plan, to reposition Imo State towards development and ensuring that even after we leave, our people will elect new managers to continue from where we have stopped not rulers who don't understand what it means to govern a people.
I still have this vision but now, it is more expanded. Getting things to work for me would be like riding a bicycle because I am not coming to learn on the job like any other rather I'm coming to reboot the system and get things to work the way it should but I takes you and I to make it work. Let's joins hands my dear brothers and sister let's return Imo State to the path of prosperity and growth. Let us return Imo to the Hands of God"
Gist