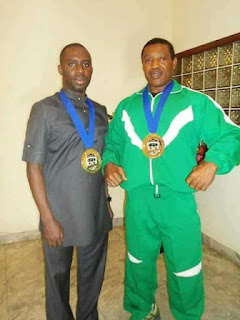 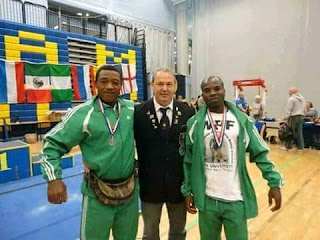 Imo State Government has doled out the sum of five million naira  to sponsor an Imo State born powerlifting heavyweight, Mr Kennedy Nwamkpa to an international powerlifting championship holding in the United States of America  (USA).

Handing over the cash to Mr Nwamkpa, the Chief of Staff Imo State Government House, Ugwumba Uche Nwosu noted that the state government  was proud to identify with Mr Nwamkpa ( popularly known as " Mr Universe") who he said has continuously made the state and country at large proud.

The Chief of Staff expressed optimism  that  Nwamkpa who has dominated the international powerlifting arena for a long time will once again make the state and country proud by returning with gold and other medals at the end of the championship.

Fielding questions from newsmen, Mr Nwamkpa expressed deep appreciation for the heartwarming largesse. He made it clear that the state government under His Excellency, Owelle Rochas Okorocha has never relented in its support for him.

He poured special encomiums on the Chief of Staff  for what he described as his unequalled youth empowerment and general philanthropy.

" I tell you, this man, Ugwumba Nwosu has
excelled tremendously in the area of youth empowerment. That is why my colleagues from the international body of powerlifting in conjunction with the Directors of Sports in Nigeria have concluded arrangements to host the first Ugwumba Uche Nwosu National open youth powerlifting Championship in the state".

Explaining further, Mr Universe said the championship which comes up in march 2018 will be preceded by the unveiling in February by the Chief of Staff wit other high powered dignitaries in the county.

Mr Nwamkpa informed newsmen that the state will witness influx of talented sports men and women from different parts of the country and beyond who will be in the state for the seven days the event will last.

Finally, Mr Universe who said he was commencing early preparation for the championship in Floria USA said he will be participating at the event with another strong and reputable powerlifter from the state, Mr Kelechi John and promised to make the state and Nigeria in general proud.

Onwuka Vivien O.(Mrs)
PRO to the Chief of Staff.