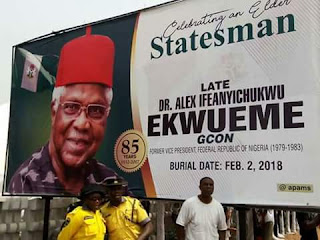 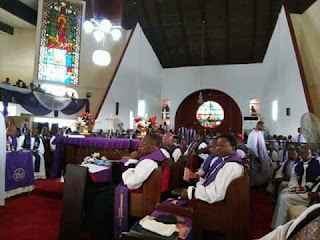 Late Dr Alex Ekwueme was laid to rest today 2nd February. The burial ceremony of the late icon, legend and statesman was a carnival as all facets of life endeavour were represented in different quantum. 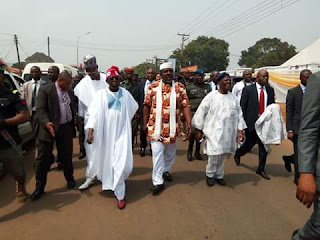 Politicians from various party dominated the burial show that at some point His Excellency Willie Obiaon of Anambara state had to take permission in observance of protocol. It had all the bigwigs present. The burial service paraded a large number of bishops and clergy from virtually all known denomination across the world, also saw an unprecedented crowd of sympathisers who thronged to bid the former Vice President a final good. 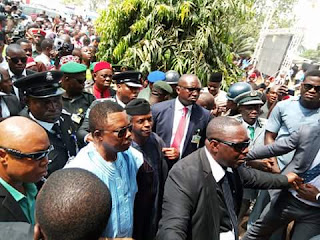 Within the country, the death of the highly revered icon was widely discussed, as many paid him glowing tributes for living a selfless and exemplary life.

Prof Laz Ekwueme -Igwe of Oko and brother, speaking at the service beseeched our leaders to emulate his lifestyle. He taked about the INTEGRITY of this great legend. How he used his personal funds to pay for the accomodation, feeding and welfare of the Ochestra that came to perform at a state event. He described the late icon as a God fearing man, who has left legacy.

Adding his voice, Emeka Anyaoku said that Dr Alex Ekwueme was a man who lived a fulfiled life.  He extoled the great icon, enumerating his steerling qualities.

It was officially announced at the burial service by the Vice president of Nigeria, Prof Yemi Osibanjo at Oko, in Anambra State during the  service in honor of the elder statesman, Chief Dr Alex Ifeanyichukwu Ekwueme GCON.

GoodHeart Ekwueme son of the late icon took the vote of thanks onbehalf of the family. He appreciated President Buhari for standing by the family and remarked that " today Oko, Nigeria stood still for my late father. "  He prayed that God would grant everyone journey mercies to thier respective destinations.