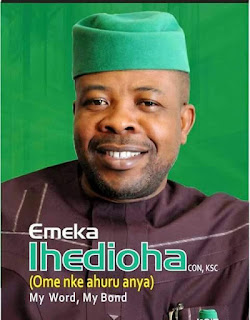 
Aside from the high-profile positions he has held over the years in the service of the Nation, Hon. Ihedioha has offered himself as a veritable resource person to the PDP since inception in 1998, serving in several strategic committees to date.
It is instructive that in the course of his legislative sojourn, Hon. Ihedioha distinguished himself as a consummate lawmaker by sponsoring or facilitating the passage of several critical bills and domestication of defining International conventions that have impacted positively on the maritime sector. Worth mentioning are the following:
• A Bill for an Act to establish a Council for the Regulation of Freight Forwarding in Nigeria-2005
• Nigerian Maritime Administration and Safety Agency (NIMASA) Act, 2007
• Nigerian Ports Act (Amendment Bill) 2005
• Merchant Shipping Bill
• The Chartered Institute of Shipping of Nigeria Bill 2005
• The International Convention for the Safety of Life at Sea (Ratification and Enforcement) Act 2004
• The United Nations Convention on Carriage of Goods by Sea (Ratification and Enforcement) Bill 2005
• The International Convention on the Civil Liabilities for Oil Pollution Damage (Ratification and Enforcement) Bill 2004
• etc
It is also noteworthy that a number of legislations in the ongoing constitution amendment process commenced with the 7th Assembly, during which Hon. Ihedioha was the Chairman, House Ad-hoc Committee on Constitution amendment.
Nigerians will not be in a hurry to forget that under his leadership and inspiration, the House of Representatives initiated and organized the highly acclaimed and successful peoples’ public sections, which involved taking the constitutional review to the 360 Federal Constituencies in Nigeria for voting by the people. This is perhaps the closest to a referendum in the process to the making of a truly peoples’ constitution.
Hon. Ihedioha is widely travelled. He has visited over 40 countries across various continents and also led several Nigerian legislative delegations to the ECOWAS Parliament, the International Parliamentary Union, IPU and Commonwealth Parliamentary Association, CPA.
As a devout Christian, Hon. Ihedioha has done enormous work to uplift the Church in his Community, his Mbaise Diocese, Imo State and the entire country, Nigeria. In the year 2000, he was admitted into the respected Order of the Knighthood of Saint Christopher (KSC) of the Anglican Communion, while the Church of Nigeria decorated him in 2014 with the Primatial Distinguished Service Merit Award for Excellence in Christian Stewardship.