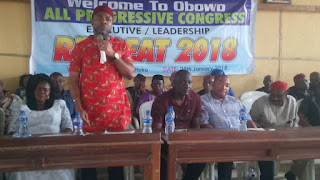 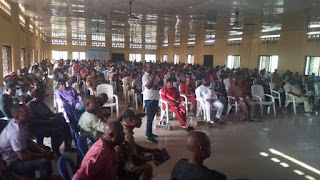 The Obowo LGA chapter of the All Progressives Congress (APC) in Imo state, today, at Obiri Obowo, situated in the LGA Council headquarters, Otoko, held a one day leadership retreat to set the road map for the year 2018.

The retreat, which, according to the APC Chairman in Okigwe Zone, Hon. Ifeanyichukwu Onwueyiagba, will become regular as the decisive year draws near, is geared towards harmonising the party re- enkindling the zeal of the party leaders.

The member representing Obowo state constituency in the Imo State House of Assembly, Hon. Barr. Kennedy Ibeh, moderated the retreat, during which the leaders at the ward level were given the opportunity to bare their minds on all issues concerning the administration of the party as well as suggest the way forward.

Speaking on the occasion, Hon. Barr. Kennedy Ibeh charged the leaders to be steadfast in their support for the party. He stated categorically that the ward leaders who are distracted by the affinity of any other structure outside the directive of the Governor are doing so at their own peril, and in utter display of ingratitude to Hon. Deacon Chike Okafor who found them worthy to be party leaders, because it their position as party leaders that placed them in the drivers seat where other people are able to notice them and lobby them.

Among the leaders who spoke at the occasion were Dr. Eli Dibia and Chief Francis Ihechere, both of whom urged the leaders to maintain their loyalty to the party and the Governor, as a mark of their love for their son, Hon. Deacon Chike Okafor.

At the end of the retreat, the ward chairman and exco members endorsed Hon. Barr. Kennedy Ibeh for 2nd tenure in the House of Assembly, passed a Vote of confidence on the member representing Okigwe South Federal constituency in the Federal House of Representatives, Hon. Deacon Chike Okafor as well as expressed their continued loyalty for the leader of the party in the state, His Excellency, Owelle Rochas Okorocha.

The roll call of the retreat including but not limited to:

All ward Chairmen and 26 exco per ward and other party leaders drawn from all the wards in the LGA, just to mention a few.