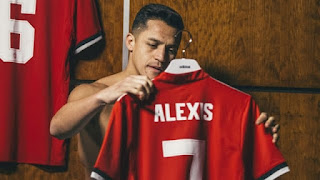 Manchested United has officially announced the mega-money signing of Alexis Sanchez from Arsenal, with the Chilean joining on a deal worth ₹600,000 a week.

The forward had a busy monday morning, having visited the United training ground and Old Trafford- where he bumped into club legend Sir Alex Ferguson before being spotted at an immigration office in Liverpool for approval on his permit.

This is the highest basic wage of any player in the Premier League. Manchester United have four of the top six earners in terms of basic weekly wage with Paul Pogba on 290,000, Romelu Lukaku on 250,000 and Zlatan Ibrahimovic on 220,000.

Sanchez, who has chosen United over their arch rivals Manchester City was earlier seen arriving at Carrington at 8am on Monday before departing the club's training base later that morning.

Thr former Barcelona star also visited Old Trafford where it is understood he was greeted by United legend Ferguson, who was pictured speaking to people sitting inside the 29 year olds taxi.
He was later seen leaving Lowry Hotel where he is staying, before leaving Manchester for Liverpool, where he travelled to have his work permit approved.