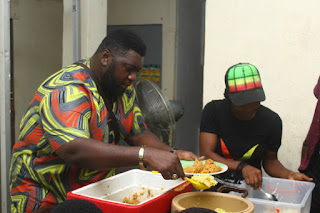 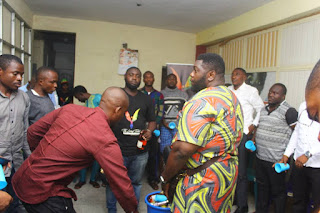 A Non Governmental Organization ,Genius Eyes International Foundation ,has launched a magazine ,The Living Tribute.
The founder and Director of the NGO,Paulcy Nnamdi Iwuala, said that the idea was to use the magazine to celebrate the ordinary people who have distinguished themselves in various segments of the society.

According to Iwuala ,who spoke in Owerri,the Imo state capital, his NGO which specializes in giving hope to the hopeless and abandoned ,will use the magazine to showcase to the world ,the creativity, uniqueness, inventions of people not considered the privileged ones in the society,especially the youths from not influential families.
The humanist who recently carried out a program called "operation feed the streets " where beggars ,the crippled, the blind and other disabled people were fed on Douglas road, said that the Nigerian mass media have become too elitist that only the rich and the privileged ones are celebrated on the pages of newspapers and Magazines.
Iwuala ,said that The Living Tribute ,who is going to a periodic publication had come to change the tide and would use the platform to encourage selflessness, creativity and industrious output from the Nigerian youths.
Iwuala said" The Living Tribute is a magazine set upon a social standard, with the major motive of promoting life and celebrating the living, and the ordinary people doing extra-ordinary things ,instead of the norm of celebrating the dead and the privileged ones.
The magazine will promote life and all essence of life which are hard work, foresight, creativity and intelligence.
We will memorialize the day-to-day lives of ordinary Nigerians who do extraordinary things to add value to the society.We recognize the un-recognized who don’t crave for recognition, but are worth being celebrated.
The Living Tribute Magazine loves the unloved, and lift the burdened souls of people who have been let down".
Iwuala disclosed that himself and Dr. Collins Obioha; who were bent on promoting excelling in people in the youths, would strive to rekindle the hardworking qualities in youths through various packages the magazine would offer.