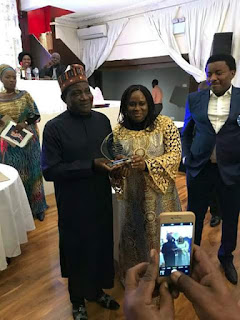 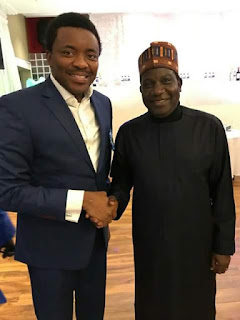 During the event, the Plateau State Governor recognised HE, Owelle Anayo Rochas Okorocha with a certificate and plaque in recognition for his Educational Development exploits and Service in Nigeria and Africa

Present to receive the honour, on behalf of the Governor was the member representing Okigwe South Federal constituency in the House of Representatives and Chairman House committee on Healthcare Services, Hon. Deacon Chike John Okafor.

The award was presented by the Governor of Plateau State Rt. Hon. Barr. Simon Bako Lalong who came with his wife, and some members of his state house of assembly led by the Hon. Speaker of the assembly. Also present was Rtd. General Lawrence Onoja, former Governor of Plateau state, who told the audience that he has known Owelle Rochas Okorocha for decades and that in all those years, his capacity to help the cause of the less fortunate people have remained the same.

Also present was His Majesty, Da Jacob Gyang Buba CON, the Gbong Gwom Jos and Chairman plateau state council of chiefs, among other dignitaries too many to mention.

In his speech, Governor Lalong of Plateau State described Owelle as a pan African who has taken education and capacity building beyound the shores of Nigeria,to other African countries, a feat that is unprecedented, and so should be encouraged by all well meaning and full blooded Africans.