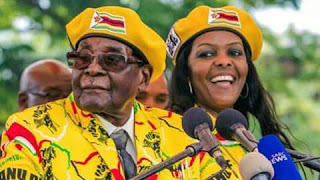 Zimbabwe President Robert Mugabe, who has ruled the country for over 37 years, since independence from the UK, has been removed from power and his former vice president, Emmerson Mnangagwa, who he sacked some days back, has been installed as an interim president.

The move comes after the Zimbabwe army seized power overnight with gunshots and explosions heard in the capital. The 93-year-old dictator was arrested along with his wife by the army in the capital Harare.