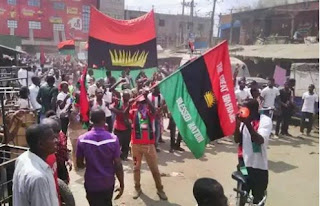 The members of Nnamdi Kanu-led Indigenous People of Biafra, living in Ebonyi state are currently being registered by the government for empowerment and job provision.

While speaking to journalists on Wednesday in Abakaliki, the Ebonyi State Commissioner for Economic Empowerment and Job Creation, Uchenna Orji, said the state government has begun data capturing and registration of members of the Indigenous People of Biafra (IPOB), living in the state.

According to Premium Times, the government said the youth ”were misled to join the agitation of the group”, adding that the exercise was going on simultaneously in the 13 local government areas of the state.

He said the initiative by the state government would make the IPOB members economically independent and help in reducing social vices and other forms of criminality currently plaguing the society.

The commissioner, who said that the state government had extended its empowerment schemes to Ebonyi youth in other states of the federation including Sokoto, Kaduna, Anambra and Lagos, added that over 3000 youths had so far been empowered in the State.

Speaking further, he said the state government was set to create 12,000 jobs through the empowerment of these youths, including women as they are currently being given N250, 000 each to start up any business of their choice so that they will become economically self-sufficient.

Orji added that the reason for the numerous empowerment programmes of the Governor David Umahi-administration was to increase the per capita income of Ebonyi citizens and ensure the boosting of the economic status of the state.

“These IPOB youths are being registered in the Department of Education and Social Welfare in the LGAs. After the process, the state government will create a programme to train them in their chosen career,” he said.

“Those of them that have taken to the streets due to lack of job will be empowered so that they can be usefully and meaningful to the society. Those who are living and staying outside the state are equally undergoing our empowerment programmes.”

IPOB, a group seeking for a secession from the rest of the country, is led by Nnamdi Kanu, whose whereabout is currently unknown after a military onslaught on his community in Abia last month.