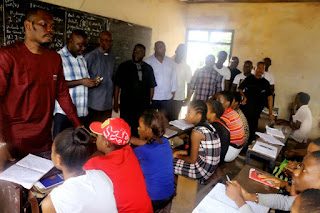 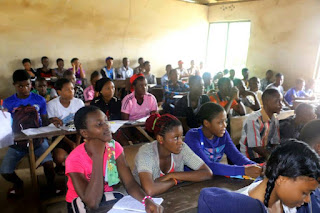 In continuation of its extraordinary service to the community, the Faith of Darlington Foundation has once again put an indelible mark in the walls of the people of Ikeduru LGA, Imo State .
Penultimate weekend, the founder of the Foundation Chief Darlington Chimezie went in the company of his friends and colleagues to officially cut the tapes of the already ongoing summer classes.
While speaking to the students at low key ceremony, Chief Darlington encouraged the students to take their studies seriously because a good education is the key to a successful individual.
He told them to indulge in more educative activities as well as join clubs that would further enhance their already acquired knowledge. 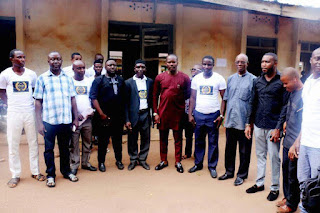 The real estate mogul in addition cautioned the students against indulging in nefarious activities and joining secret cults.
When asked why he decided to set up the extra mural classes, the Ndiokwu-Umiyi born business man noted that it was for the good of his people adding that although his parents could cater for his education, as a young boy,  he knew there were his contemporaries who weren't faring any better as their parents could hardly even pay for uniforms.
Continuing, he stated that it was such experience that spurred him to set up his Foundation which has been involved in a lot of scholarship programmes.
Guests at the event praised the effort of Chief Chimezie in organizing such an impactful programme for the young school kids of examination class.
Obum, a Jss3 student hailed the founder of the Faith of Darlington Foundation for considering the plight of young scholars  like himself whose parents cannot afford to put them in extra mural classes.
The young student further stated that it was his prayers that good people like Chief Darlington Chimezie occupy the corridors of power because their goodwill and benevolence will mean a lot to the poor.
Present at the opening ceremony were ; Mr.  Henry Igbokwe an APC chieftain in Ikeduru, Hon. Sir Anyaehie Okameme the incoming T. C chairman of Ikeduru LGA, Arc.  Akonye Anselm a member of the incoming Transition Committee of the LGA, Prince Dabirinze, Chief Magnus Melariri the Coordinator of Ugwumba  Movement , Ikeduru LGA and many more friends and well wishers.
The summer class will specifically cater for the examination class students (SSCE, NECO, GCE & JAMB) starting from 7th August  to the 8th September,2017 by 9am to 3pm each day.
The venue for the classes are:
Ikeduru West (Akabo, Amatta, IHO, Uzoagba, Ngugo/ikembra,Atta 1 & ATTA 2 Wards,); Akabo High School
Ikeduru East (Amaimo, Inyishi /Umudim , Amakohia , Okwu , Ugirike, Eziama, Avuvu wards) ; AMAIMO Community Secondary  School.
Please ensure your child, ward or student is a part of this lofty programme. Sponsored by Faith Darlington Foundation (FDF).
NEWS