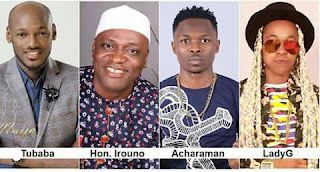 LadyG who was favoured at the Imo Artiste Conference which took place on April 29, 2017 at Imo International Convention Center Owerri, will now be soaring under the influential feathers of Tubaba’s Hypertek Records as was promised by the state governor Owelle Rochas Okorocha at the April event, while other artistes like Acharaman, Sparks, etc who were promised various rewards, will be receiving them.

In a statement by Hon.  Irouno Chukwunonye, the Senior Special Assistant to Imo State Governor on Entertainment, the August 16 event will be ‘redemption and elevation showers’, as artistes will be going home with the Two Hundred Thousand Naira (N200,000) and Hundred Thousand Naira (N100,000) promised to those who performed at the Imo Got Talent Fiesta.

With Governor Rochas Okorocha as the Special Guest of Honour and the Chief of Staff to Government House Owerri, Ugwumba Uche Nwosu, as the host, Hon. Irouno further stated that “all artistes are expected to reignite their music and comedy flames, to capture the admiration of the Governor, Record Label owners and the teaming crowd”.

Meanwhile, the affected artistes are urged to be at the Bongo Center today Tuesday August 15, 2017, by 2:00pm, for briefing and Soundcheck ahead of the Wednesday August 16, 2017 event which will be kicking off by 12:00 noon at Imo International Convention Center Owerri with the best of the best in the State set to grace the stage again.