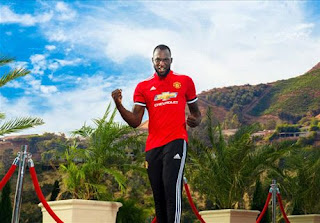 Manchester United have completed the signing of Everton striker Romelu Lukaku for a fee of £75 million.

On Saturday morning United confirmed they'd agreed a fee for the 24-year-old, who had been subject a late bid from Chelsea to steal him away from their title rivals.

They've now agreed personal terms and the Belgium international has completed a medical in Los Angeles, meaning he'll link up with the team on their pre-season US tour.

The 20-time English champions moved swiftly to close the deal ahead of fellow admirers Chelsea following their decision earlier this week to withdraw from talks with Real Madrid regarding their striker Alvaro Morata.

Lukaku has signed a five-year contract with the Old Trafford outfit and will join the rest of the first-team squad when they fly out to Los Angeles on Sunday.

Lukaku has been holidaying with close friend and new team-mate Pogba in California, where United are set to arrive for the start of their summer tour.

Jose Mourinho is delighted to have signed the forward, telling the club's website "Romelu is a natural fit for Manchester United.

"He is a big personality and a big player. It is only natural that he wants to develop his career at the biggest club. He will be a great addition to the group and I know they will make him very welcome. I am really looking forward to working with him again."

First of all i want to thank God for this opportunity. Delighted and blessed to be part of the greatest club in the world @ManUtd pic.twitter.com/dWrQjHkH5a
— R.Lukaku Bolingoli10 (@RomeluLukaku9) July 10, 2017

This will be Lukaku’s second stint under Mourinho following their previous spell together at Chelsea. However, the Portuguese loaned the striker to Everton soon after returning to Stamford Bridge in 2013 before selling him to the Toffees on a £28m deal the following summer.


The Belgian thanked Everton for his time at the club, but is eager to work with Mourinho again and wear the red jersey of Manchester United.

"I would like to start by thanking Everton and the fans for the last four wonderful seasons, I have made some special friends and we have shared some amazing moments," Lukaku said.

"However, when Manchester United and Jose Mourinho come knocking at the door it is an opportunity of a lifetime and one that I could not turn down. You could see the fight, determination and the spirit in this team during the Europa League final and I want to become a part of that.

"I cannot wait to run out at Old Trafford in front of 75,000 fans but before that pre-season is where the hard work starts and I am looking forward to that first training session."

Lukaku, who scored 87 goals in 166 games for Everton, is United’s second major signing of the summer following the earlier arrival of Swedish defender Victor Lindelof from Benfica.