The Countdown is on: Face of Arise Afrika Pageant/Award 2017

The countdown is on for what is currently the most talked about events in Imo State. It is the grand finale of the most anticipated beauty pageantry and award event so far in 2017 called FACE OF ARISE AFRICA PAGEANT/ AWARDS 2017.
It's  exactly 45 days countdown now before the D day finally comes for the biggest, glamorous and  most exciting event in Africa!! The Grand Finale of   Face of Arise Afrika which would also feature Distinguished Personalities, Community Development and Best Brands Awards
This event will be taking place simultaneously on 29th July at Benchmark Hotels Owerri by 3pm.


The race for who will be crowned FACE OF AFRICA  in 2017 began  when  Mr. Ikechukwu Anyanwu Arise Afrika boss, announced the competition which is the first of it’s kind at the unveiling ceremony on the 29th April.

We have lots of beautiful ladies according to the founder of the initiative and CEO of Ariseafrika.com, the pageant was initiated to Redefine Africa to the world through arts, culture and beauty. To promote the abundant beauties as well as the image of Africa to the world. It is set to begin with an online contest with 30 Contestants as the race has grown more interesting everyday.
The pageant is designed for every young person  between the ages of 18 -28 years old.
It is aimed at organizing these young beauties towards a new order of projecting Nigeria Image and creating a platform for general entertainment. The beauty pageant is set to hold for the first time in history this year. The application form are now on sale till June   30th.
The winner of the pageant shall embark on charitable works, awareness campaign in a show of appreciation and give back to the community.
Arise Afrika boss Ik Anyanwu while speaking to newsmen in Owerri explained that the face of Arise Afrika is the first of its kind and the biggest scholarship pageant competition in Nigeria.
"it is not another beauty pageant, but an act towards inspiring and nurturing young, talented models as we seek to raise the beautiful continent of Africa. It is also another season to celebrate people, places and values during this season as special recognition will be given to distinguished personalities during the show " he said

Face of Arise Afrika Beauty Pageant will afford the organizers opportunity to choose a brand Ambassador who will run charitable projects within and outside Nigeria and also represent Nigeria in International competitions.
Anyanwu further explained that the Face of Arise Afrika is an answer to the quest among most youths to explore their talents and be identified as celebrities but due to the non availability of adequate platforms in Africa for self discovery, most youths never get to fulfill this dream" he concluded.


The winner will emerge through the choice of the masses and the judges at the Benchmark Hotels.
The Contestant with the highest vote will become AriseAfrika.com's ambassador for 6 months with many benefits.
The event is being talked about to be one of the biggest event that will happen in Imo state in 2017. It will be attracting lots of reigning and former beauty Kings and Queens from across the country. Different modeling agencies and fashion moguls are also getting ready for the big day.
The Face of Arise Afrika  is not just a pageant, it is an empowerment initiative that will see to it that the ladies that participate become more  relevant to the society through participation in various /skills acquisition programmes. Before the finale the ladies will participate in social responsibility works and after the pageant they will all be trained in various skills including computer training, bakery, bead making, cakery, fashion, make-up etc.
Hence, all the ladies can be said to have won by taking part.

They will also go for photo shoots and tours aimed at raising funds for charity.
The event will peak with an award. The awards are based on surveys and in-depth enquiries, a website was designed by the organizers and made open to the public to decide by voting. It is aimed at picking out  individuals that have contributed positively in the different important aspects of society, especially in Education, Youth Development, Justice system, enterprise and public service.
To  cast your own vote click the link below:
http://www.ariseafrika.com/p/visions-redefining-africa-to-world.html?m=1
There will also be raffle draws for the audience through which amazing prizes including smartphones, home appliances, headphones, free dinners will be won.
Come 29th July, 2017, it will be a convergence of beautiful ladies and beautiful minds where both will be duly recognized.
There will be performances by music stars, comedians, DJs, dancers and actors.
Popular On Air Personalities, showbiz people, actors and actresses, beauticians and other people from other walks of life will be there.
Green carpet: 3pm – Red Carpet
Do not miss out! 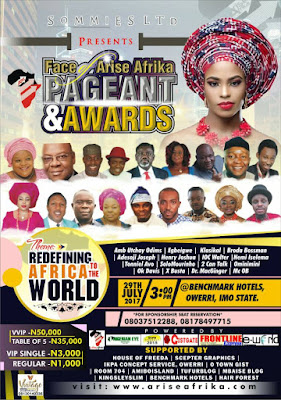 For Participation, sponsorship and seat reservation: Call 08037512288
With N2,500 form you can achieve your dream. It can be gotten from the following locations.