In MEMORY OF MAXWELL MAHAMA 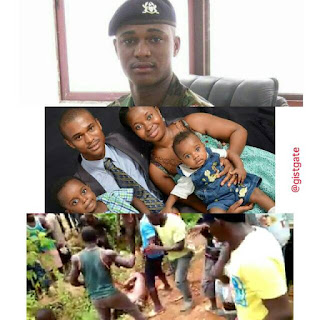 I write this with a mixture of pain and anger and disgust in my heart.

Captain Maxwell Mahama was an Ghanain military man who was lynched by an irate and irresponsible mob in Ghana on May 29th 2017.
The man who was not in uniform and was jogging had asked some women for direction. When they sighted that he had a pistol with him, they raised alarm and the local people said to be vigilantes chased him and caught him, beat him with all hard objects and all their strengths and then burnt him.

*Maxwell had a wife and two kids at home*

He begged the crowd to wait and confirm that he was a military man and not an armed robber as they suspected but they refused and executed him on the spot.

WHAT IS WRONG WITH AFRICA?
This is not the hundredth time an innocent person has been collectively killed because he was "suspected" and not confirmed a criminal.
There have been cases where people have been lynched for stealing things worth not more than $1.
All across Africa the barbaric  act of Jungle Justice have continued unabated and most times the perpetrators go scot free leaving the families of the killed in agony and without closure.
I have no doubt that some who are reading this have participated directly or indirectly in this heinous act at one time or the other.

Our people seem to have been made on-the-spot jury, judges and executioners by only God knows who.
Once a person is suspected to be a criminal, the youths,  who most times do not even wait to hear the suspect's side of the story or any story at all, will pick up  stones, sticks and such other things and kill with no atom of humanity.
Many innocent lives have been ended thus.
There are even cases of people who were lynched and burnt because they belonged to different religions and expressed their views.

Why are we so blood thirsty?.

*BUT WE WORSHIP THOSE WHO DESERVE TO BE LYNCHED*

We know the worst  enemies of Africa and our respective countries.  They are the presidents, the vice presidents, the governors, senators, etc that loot and steal in billions of Dollars and leave the masses in pain and death and suffering.
They have refused to provide good roads and people die in thousandsin avoidable road accidents.
They refuse to provide good hospitals and thereby killings many indirectly.
They refuse to provide jobs and make the society conducive for entrepreneurs through provision stable electricity and the likes, thus leaving millions below the poverty line and giving many youths no choice than to become hoodlums.

But when we see them we fall at their feet and worship them. We are so keen to praise our slave masters but we are fast enough to kill fellow slaves in the mordern slavery Africa has been subjected to by wicked and self-seeking rulers.

It is time for Africans and especially the youths to have a change of mind. A person remains a suspect until proven to be a criminal by an adequate court.

Yes I understand the anger and the desire to get instant justice, but rushing to kill a suspected persons have cost us many innocent lives already. We cannot continue like this.
The right thing to do will always be to disarm the suspect and call on the police.

Let us stop this barbarism!
Let us stop being so heartless  and bent on shedding blood!!

Remember just like the Maxwell  Mahama, anyone; you,  your friend, your brother, or father, or sister may be a victim of unjust mob Jungle Justice tomorrow.

I hereby call on the legislators to make laws that will define heavy consequences against anyone or any people who engage in jungle justice.

Africa, it's  time to be civilized. It's time to get it right.